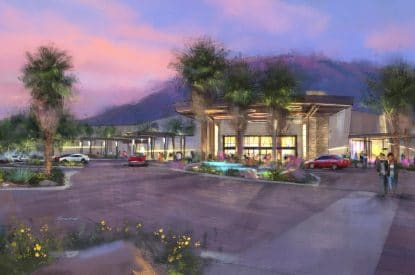 In 2017, the Tribe acquired 12.5 acres at the corner of E. Palm Canyon Drive and Date Palm Drive to complete a 13.6 acre project site for an entertainment development project in the heart of downtown Cathedral City. As part of that agreement, the Tribe contributed $5.5m to build a new city fire station at 68950 Buddy Rogers Ave.

The gaming floor will take up 40,000 sq. ft. of the planned 125,000 sq. ft. property with the remainder taken up by retail, restaurants and tribal government offices. It will house 500 slot machines and eight table games.

“We are excited to begin construction on this large-scale investment in Cathedral City,” Tribal Chairman Jeff L. Grubbe said. “This project will create jobs, revitalise an undeveloped downtown property and support Cathedral City’s economic development efforts. In addition, we have the honour of working with Cathedral City to relocate and build a new fire station that will allow fire fighters to serve city residents from a brand new state-of-the-art facility and a more desirable location.”

“This is a real game changer for Downtown Cathedral City,” stated Cathedral City Mayor Mark Carnevale. “For more than a decade, the land where the casino will be built has been an eyesore to the community. Having a brand new gaming and entertainment center as a major anchor to our Downtown Arts and Entertainment District will spur more interest and development, provide quality entertainment for our residents and visitors, and generate additional revenue for city services. We have been waiting for this day to happen and we could not be more pleased. Downtown Cathedral City is now the place for quality theatrical performances, blockbuster films, concerts, outdoor festivals, and soon to be added to our collection, gaming.” The Agua Caliente Band of Cahuilla Indians is expected to announce a groundbreaking celebration date soon.

“The City of Cathedral City and Agua Caliente Band of Cahuilla Indians have been working as partners for more than two years to make this project come to fruition,” stated Administrative Services Director Tami Scott. “We have been able to formalise agreements that will provide improved streets and infrastructure around the property as well as enhanced public safety measures including the new fire station, public safety personnel, and other amenities that will greatly enrich the aesthetics for our downtown.”

The Palm Springs arena is a joint project between the tribe and Los Angeles-based Oak View Group, which develops sports venues. The new Seattle hockey expansion franchise is expected to have its American Hockey League farm team play at the arena beginning in October 2021. With a capacity of 10,000 seats, the arena has the potential to attract major entertainment acts to the desert. The Show concert venue at Agua Caliente Resort Casino Spa in Rancho Mirage seats 2,000.