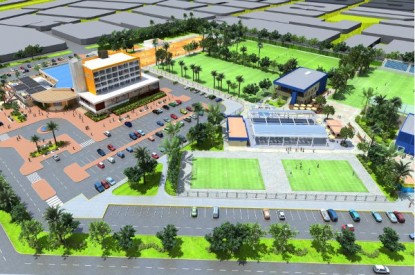 The governor of Río Negro Province, Alberto Weretilneck has presided over the ceremony to begin the building of a new large scale casino and entertainment complex in the capital.

The Paseo del Sol complex will be built in the facilities of the Club Sol de Mayo sports club. Investment in the new complex will amount to around $800m and has a completion time of three and a half years.

The new complex, which seeks to improve the hotel and recreational services of the city of Viedma, will encompass a total area of 14,000 square meters including outdoor spaces with parking and green areas. Pedro Pesatti, vice governor of Río Negro was also present at the event.

Pesatti highlighted the fact that the project was the result of an agreement between the Provincial Lottery, Casino del Rio, the Sol de Mayo club, the Municipality of Viedma and the provincial government. In addition to the extra jobs the new project would create the new complex will “be a great locomotive for the development of tourism in the city,” he said.
In December 2017 the government of the province of Río Negro presented the final agreement with local operator Crown to extend its licence agreement with seven gambling halls in the province. In return, the company was given permission to build the Paseo Sol del Río hotel casino complex in Viedma. The licence will run until 2042.

The new complex will include a 54 room hotel, a food court, a convention centre for more than 500 people, a shopping centre and a casino, which according to the architects of the hotel will only take up 6 per cent of the new complex. In return, Crown requested and was granted a 10-year extension of its licences for its operations in Las Grutas, El Cóndor, Viedma, Cipolletti, Roca, Choele Choel and Catriel.

Crown signed a contract with local football club Sol de Mayo for the transfer of two hectares of waterfront land. Members of the club approved the offer in May 2016. In return, the club will receive a $114m facelift including work on the football grounds, the swimming pool as well as other infrastructure works (which will be part of the total budget for the new complex). The current casino in the provincial capital has until now operated in a rented property.