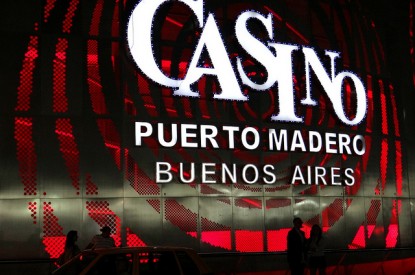 As reported in April a number of local gaming unions are now urging the government to put 12 casinos under state control so that the state should reap the benefits of gaming in the province.

The proposal now has the backing of two State Senators who have introduced a bill into the Legislature of Buenos Aires Province. At a press conference held last week in the city of Tandil General Secretary for the Provincial State Workers Union, Aníbal Settino said that the bill had initially been developed during a forum on the issue of gaming in Buenos Aires which took place in Mar del Plata in September in 2012 and now looks like a “real possibility.”

He said: “The truth is that it is the state which pays for the personnel, the light, the carpets the clothes for the workers and it’s the private sector which takes its proportion for free . . . the state should stop being the dumb partner in this business.”

The new proposal is now gaining momentum having been introduced into the House Assembly of Buenos Aires Province by Senators Cristina Di Rado and Jorge Ruesga. According to the draft law, all those casinos with their licences ending at the end of the year would go to the state meaning that the state would have control over 3,863 slot machines.

It is believed that the new act would not affect the bingo licences which were extended last year. In 2012 Governor of the Province Daniel Scioli extended the licenses of 14 of the 46 bingo halls  until 2027 in a deal that saw bingo operators pay a special license fee, a proportion of which was payable before August 2011.  In statements to press Settino announced that the most important casinos which would be affected by the new legislation would be those located in the cities of Tandil, Mar del Plata, and Tigre and that a number of municipal governments were also in favour of the new proposal.