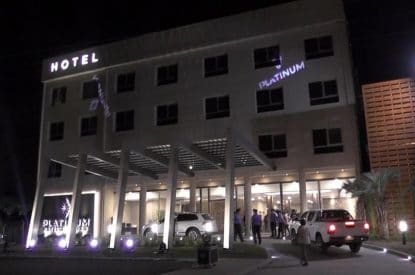 A four-star hotel and casino has opened in Charata a city in the province of Chaco, Argentina. With a $145m price tag the four-star Casino Platinum hotel was inaugurated last Thursday. The investment was made by Hogar S. A, a gastronomic company which is part of the Casinos del Chaco company, which in turn is part of local company Casinos del Litoral.

The works are part of Casinos del Litoral’s investment plans, which include two hotels: one in Charata and one in the city Villa Ángela in addition to gaming rooms in several locations in the province.

Governor Domingo Peppo, who was present at the opening on Thursday, said that the opening of the hotel and casino was good news for the province especially now as the economic crisis in Argentina deepens.

“This will continue to give Charata prominence, which already has hotels of a high standard and it is also a generator of employment . . . at a difficult time in the country.” The licence was granted, he said, after a tender was launched by the Lottery Board which has been carried out in different parts of the province. Mauro Flores President of the Chaco Tourism Institute said that the new hotel will meet growing demand and create jobs.

As well as the 40 rooms the hotel comes equipped with a spa, gym, pool and a 180 person capacity conference centre.