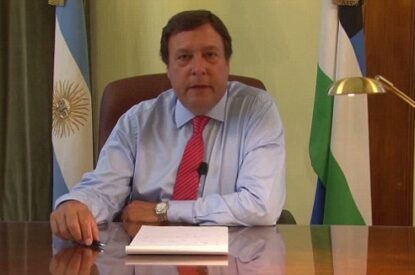 The Governor of Río Negro Province, Alberto Weretilneck has announced that he will end the casino licence contract with Entretenimientos Patagonia S.A.

According to local press, gaming company Entretenimientos Patagonia S.A, breached its contract because of its failure to build a major bus terminal in the city as agreed in its contract with the government.

In a radio interview Weretilneck said that the issue would be resolved before the end of his term as governor. When the conflict with the company began earlier this year the governor was asked to guarantee 350 jobs for the workers in the three casinos.

In January 2017 Weretilneck signed an agreement with Entretenimientos Patagonia S.A to extend the licence of gaming halls in the cities of Bariloche, El Bolson and Ingeniero Jacobacci for another fifteen years. In addition to an increase in the monthly fee the operator also agreed to build a new bus terminal in the city of Bariloche as well as fund the building of other public works in return for the extension.

The governor announced at the time that the new agreement would help increase tourism in the area. He also emphasised the economic benefits generated by the company’s presence in the province. As well as being in charge of the construction of the bus terminal the company was responsible for the expansion and remodelling of the central branch of the Casino de Bariloche. Meanwhile the company agreed to take on responsibility for other smaller projects in the cities of El Bolsón and Ingeniero Jacobacci.

Earlier this year the governor admitted that its ties with the company were under review. In September it was revealed that another local operator Crown Casinos had made an offer to buy Patagonia Entertainment thereby establishing a monopoly of gaming in the province.

Governor Weretilneck said that the government is looking at either giving Crown temporary or long term control over the three casinos.

In December 2017 the government presented the final agreement with Crown to extend its licence agreement with seven gambling halls in the province. In return, the company was given permission to build the Paseo Sol del Río hotel casino complex in Viedma. The licence will run until 2042.

The new complex will include a 54 room hotel, a food court, a convention centre for more than 500 people, a shopping centre and a casino. In return, Crown requested and was granted a 10-year extension of its licences for its operations in Las Grutas, El Cóndor, Viedma, Cipolletti, Roca, Choele Choel and Catriel.