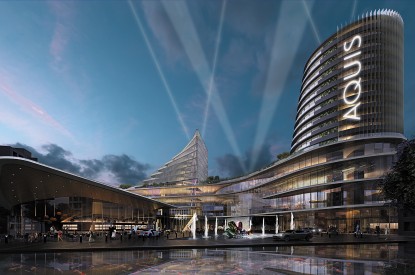 Canberra Casino will be able to operate slot machines for the first time following a decision by the ACT Government to allow the move in exchange for a A$330m redevelopment at the venue which will new restaurants, hotels, shops and entertainment to the Australian capital.

Chief Minister Andrew Barr has approved moves for the casino to install 200 poker machines but has rejected pleas to allow the existing cap of 5,000 state machines to be increased to allow for the casino’s new slot floor. Instead the casino will have to buy machines from Canberra’s clubs. It will have to buy 267 to adhere to the Government’s trading scheme of forfeiting one in four machines.
Mr Barr added: “Only once the work is complete would the casino be allowed to operate poker machines, assuming clubs want to sell them the licences.”

Aquis stated: “This positive outcome gives us the certainty we require to finalise our detailed business case for the project. To aid in developing the detailed business case, the ACT Government has invited a proposal based on the inclusion of up to 200 Electronic Gaming (Poker) Machines. The government response to our bid is extremely encouraging, providing the ACT an opportunity to compete with other Australian cities actively pursuing integrated resort development to attract new money into their economies. A project like this is an increasingly important piece of tourism infrastructure that will assist in securing demand for new direct international flights to and from Canberra.

“This progression is the next step towards Aquis Entertainment’s vision to provide Australia with ‘next generation’ entertainment, via an urban renewal project designed to deliver a range of economic and tourism benefits for Canberra. The time is right for a project of this nature, with light rail set to connect the CBD to the North, and the rejuvenation of Civic a high priority for businesses and residents alike.”

Aquis, who took control of the casino last year, wants to build two hotels, restaurants, bars and high-end retail outlets as part of transformation that would bring 200 full-time jobs to the property.
Aquis Executive Director Justin Fung said: “It’s major redevelopment of the existing casino, as well as the adjoining land between our current casino and the Convention Centre. The redevelopment would include 100 five-star hotel rooms, as well as 12 six-star luxury villa-type accommodation and we’re talking about luxury retail world-class food and beverage. We are talking about revitalising the southern part of Civic and creating that vibrancy that is lacking here.”

Aquis is aiming to open the restyled casino in 2018, with the highest structure being 20 storeys high.

“We would market it as an integrated resort and give people an opportunity from Sydney to come down to Canberra. It is that type of project that can be a magnet,” Mr Fung added.

Aquis added in its statement: “In light of this announcement, it is to be expected that ClubsACT will make a range of claims in an effort to protect their monopoly position on electronic gaming in the ACT. It is, however, positive to note the government’s policy focus on achieving an overall reduction in poker machine numbers, coupled with the benefits the introduction of machines to the casino can deliver in respect of jobs, tourism and economic growth as one part of a broader vision for the new precinct. We understand that clubs have been actively seeking to diversify their businesses over recent years and it is our hope that we can work positively with clubs to create a strong and cohesive industry.

“Ultimately our participation in the EGM trading scheme provides increased opportunities for clubs to unlock capital to use in further diversifying their businesses. An exciting new precinct in the CBD, supported by a full service gaming product, will provide a beacon for domestic and international visitors who have an expectation of what an integrated resort should look like, and the quality of experience it provides, as well as being a gathering place for Canberrans in the heart of a thriving city centre. Traditionally casinos are the market leaders in harm minimisation measures related to gambling, and Aquis is committed to continuing to employ ACT best practice in this area.”

The machines are likely to trade for around $18,000 a machine, which would result in a total spend of around $5m although some sources have suggested up to $50,000 for each machine.

Not all club owners are against the move though.

Peter Conway, spokesperson for Arko Group, owner of the Kambah Tavern and the Statesman Hotel,said: “We welcome any proposal that will allow poker machines in the casino. We believe that the market should be opened up. It is the Arko Group’s belief that the clubs have been behaving in a predatory manner, using the community definition to go after any club that was in any financial difficulty.”