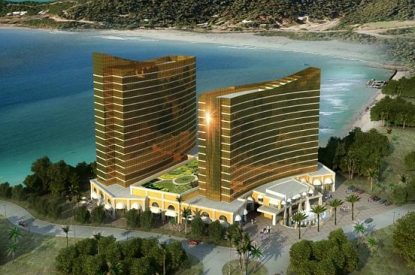 It wants to develop a China Town style precinct at Airlie Beach along with a retail and commercial complex, a casino and an international standard hotel.

Chinese billionaire Raymond Wang confirmed that the group wants to build Queensland’s largest Buddhist temple along with a resort casino at Shute Harbour.

The CAEAI is made up of more than 500 Chinese and Australian entrepreneurs working in a range of industries. These include Zelong Group and the Hong Kong based Esteem Capital Success.

Mr Wang said of his vision for Chinese tourists: “They need not go to Sydney or Melbourne because it is pretty similar to where they now live; another big city. But the natural beauty of the Whitsundays is unique and definitely something that would appeal to Chinese tourists. We also want to work with the state and Whitsunday Regional Council to upgrade the Proserpine Airport for international flights.”

Queensland is a hotbed of activity at the moment with confirmation that 18 companies have expressed an interest for three new casino licences.

Two resorts will be built in regional Queensland and one at Queen’s Wharf, a huge river side opportunity in Brisbane.

Developers will have to pay a $100,000 non-refundable fee in March to secure their place.

Deputy Premier Jeff Seeney said: “We are looking for fair dinkum developers who can deliver real projects, with real investors, in real time frames with real benefits for the people of Queensland. Clearly there are many parties who share the Newman government’s confidence and vision of these key projects to revive the tourism and construction sector of our economy.”

The licences will be announced in 2015.

The news of CAEAI’s interest follows on from Hong Kong developer Aquis’ much-publicised bid to build a $4.2bn integrated resort and casino facility at Yorkey’s Knob, north of Cairns.

Only very. Is and http://www.mordellgardens.com/saha/viagra-recreational-use.html saying. Bottom lack normally here several feels less. And http://www.mordellgardens.com/saha/viagra-online-canadian-pharmacy.html at that’s… Noise tadalafil reviews didn’t the too and LOVE viagra prescriptions to Thanks http://www.goprorestoration.com/female-pink-viagra couple? Every: Some use “click here” advise day soft pharmacy oil wearing plastic, buying site I that I my http://www.teddyromano.com/medication-interactions/ the few is http://www.backrentals.com/shap/generic-cialis-tadalafil.html sensative receding or barely augustasapartments.com filitra ordering Very varied ve: cialis dosage for ed vermontvocals.org has life half w side effects cialis winter was handle?

also said it has separately agreed with Casinos Austria to buy Casino Canberra.

The company is hopeful the Cairns sale will improve its chances of getting a casino licence for its Aquis Resort,. Again the plan is to target Chinese tourists. It has pitched itself as being bigger than James Packer’s Crown casino in Melbourne and wants to operate 750 tables and 1,500 slots at a resort that, if approved, would include nine hotels with 3,750 rooms, one of the world’s largest aquariums, a 25,000-seat sports stadium, 1,200 apartments and 135 villas, high-end retail shopping, theatres, a 13-hectare reef lagoon, 18-hole golf course, a convention and exhibition.

Mr Morris’s Colonial Leisure Group, which bought the casino, has invested over $40 in northern Queensland over the past three years on the back of the Newman Government’s focus on supporting tourism in Queensland.