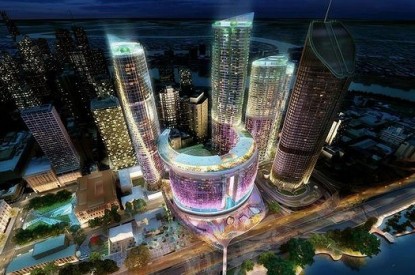 Australia’s big two; Echo and Crown, have now presented their plans to transform Brisbane with the promise for one of the city’s casino licence at Queen’s Wharf in the city centre.

Both operators are promising to revitalise large public spaces as part of their bid with water parks, playgrounds, open-air amphitheatres and giant screens coming to the fore.

Greenland Group and Crown Resorts are proposing to build Greenland Crown; a landmark entertainment and tourism destination with a world-class precinct boasting signature restaurants and bars, festivals and concerts. There will be active waterfront and new public places for the community to enjoy live sports broadcasts, fashion, arts, music, markets and public celebrations. The heritage buildings will also be revitalised and made more accessible to the public. Crown’s plans will also include the sky pool park, a huge roof top infinity pool and open-air entertainment arena with views to South Bank.

Tropical gardens, which will be available for everyday visitors as will a public garden area with space for up to 8,000 people alongside a ‘waterfall’ bridge linking to a theatre at South Bank.

Greenland’s Chairman, Yuliang Zhang said: “Queen’s Wharf will be a must-see for locals and international travellers and an entertainment precinct that Queenslanders will be proud of.”

Crown’s James Packer added: “With Greenland and our world-class architects, I am committed to building something truly spectacular – a landmark precinct for the people of Queensland.” 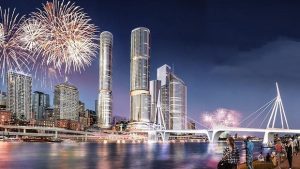 Echo’s Chief Executive Matt Bekier said: “Our designers and advisers have come up with some fantastic concepts to really activate it with pop-up stores, with entertainment facilities. I think we can bring it to life. But it is obviously the biggest challenge in this ¬precinct.”

The winning bid is expected to be announced towards the middle of the year.

Deputy Premier Jeff Seeney said: “Our probity processes will take as long as they need to take and they will be as thorough as we can make them, irrespective of which individual or which company is involved. Tourism is one of four pillars of the Queensland economy. We have a great many natural wonders which are great tourism attractions for Queensland, but if we are going to be competitive, if we are going to remain competitive in that international tourism market, then we have to offer a product that fills this segment of the market as well.”