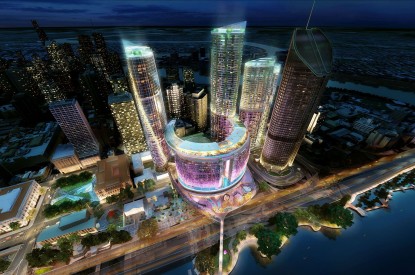 Echo Entertainment has been given the green light to build a US$1.5bn river-side casino resort in Brisbane’s Central Business District, beating James Packer’s Crown Resorts to the opportunity.

It will be home to five new premium hotel brands, three 6-star venues, including Ritz-Carlton and Rosewood and 50 restaurants and bars, from fine dining to pop-up cafes.

It will also have a spectacular water and light show, playing several times each night in the new River Arena, a new lyric theatre at QPAC, a riverfront moonlight cinema and 12 football fields of public event space.

Queensland state premier Annastacia Palaszczuk said: “This development will change Brisbane’s CBD. I am very excited about the proposal and the project and we know what this means for Brisbane, making it a premium tourist destination.”

The state’s former Treasury building, which is currently home to an Echo casino, will be transformed into a Ritz Carlton Hotel.

He described as ‘arguably the most significant redevelopment project in the history of the Brisbane CBD.’

“Brisbane should have the best integrated resort in Australia. Not just a good integrated resort that plays second fiddle to Melbourne, Sydney or Perth, but the best integrated resort in the country,” he added. It is very deliberately, unmistakably, quintessentially Brisbane. Echo Entertainment Group will have more business and more staff in Queensland than anywhere else in the world when Queen’s Wharf opens. We have very significant equity in this development – real skin. So much so that the Board of Echo Entertainment Group recently formally committed to move our corporate head office to Brisbane, if Destination Brisbane is appointed to develop Queen’s Wharf.”

Echo Entertainment Group Managing Director and Chief Executive, Matt Bekier, added: “By relocating the existing casino, and transforming Brisbane’s heritage Treasury Casino buildings into a premium shopping experience and a new six-star Ritz-Carlton Hotel, DBC’s proposal connects and activates the whole precinct with Southbank, Queen Street Mall and the CBD. By using the whole precinct, we have been able to provide real connectivity to the rest of the city, making sure that this really becomes the new heart of the CBD.”

The hope is to deliver 1.39m additional overnight tourist visitors to Queensland each year from Day 1. “That is a genuine game-changer for tourism in Queensland,” observed Mr. O’Neill. “The distinctiveness and appeal of our scheme, together with the huge reach of our Consortium Partners’ distribution channels into China, Asia and around the world, can super-charge Queensland Tourism. The 8000-plus new jobs this will deliver to Queensland, will be in addition to the over 3,000 people already employed at Echo’s existing Queensland facilities. These jobs will be in the operation of the resort, in head office functions and in the new Queensland Tourism and Hospitality School.”