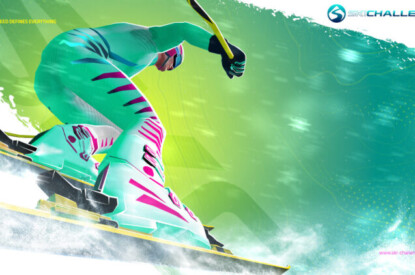 Players can now collect skill points by winning competitive races, which sees them reach new heights by ranking in one of several categories – Bronze, Silver, Gold and Master. In addition to being ranked, players can etch their name in history by appearing on new time-based leaderboards, showcasing which skiers really are king of the hill.

This latest update will also allow players to customise their look, pampering their avatar with new clothes and accessories. It also been confirmed new items will be added to the game on a regular basis.

Ski Challenge, which is based on Greentube’s first-ever gaming title from 1998, has been produced in collaboration with Swiss-Ski, the Austrian Ski Federation and the German Ski Federation, offering players exclusive tracks from the downhill skiing world.

Michael Bauer, Greentube’s CFO/CGO, said: “Unsurprisingly, this new and improved version of Ski Challenge has proven to be a huge hit with players old and new. It would have been remis of us not to continue its development post-launch considering so many people are enjoying the game.

“This trio of exciting updates adds an entirely new layer to the game that we are confident players will welcome and enjoy. On top of this new functionality, we will further develop additional features which will increase the competitive element between the players such as tournaments. Although the product is already really fun to play there’s a lot more to come in the future – so stay tuned and practice your skills.”