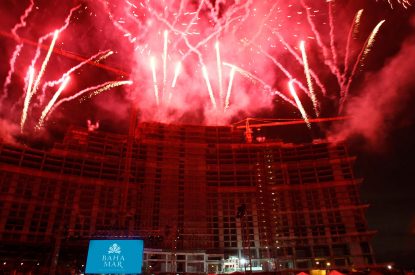 Chow Tai Fook has stated that Macau operator Sociedade de Turismo e Diversões de Macau (STDM), would not be involved in the Baha Mar project in any way if its deal to purchase the property goes through.

Former Baha Mar Director Dionisio D’Aguilar argued that CFTE was not suitable to invest in Baha Mar as it invests in Sociedade de Turismo e Diversões de Macau (STDM), owned by Macau businessman Stanley Ho.
MGM Resorts once ran into regulatory problems after partnering with Ho’s daughter Pansy Ho for its project in Macau. New Jersey’s Casino Control Commission claimed Stanley Ho wasn’t a fit and proper person as they claimed he had links to criminal gangs in Macau.

Chow Tai Fook Founder Cheng Yu Tung bought a ten per cent stake in STDM who owns SJM Holdings, one of six Macau casino operators.
A spokesperson for Chow Tai Fook said: “The Cheng family’s role in the Macau casino is strictly as an investor with no involvement in day-to-day management of the casino or oversight of the gaming industry in Macau. There will be no affiliation on this project with STDM or SJM.”

The Bahamian government has now confirmed that Hong Kong-based Chow Tai Fook has made an offer to buy the US$3.5bn Baha Mar Resort.

The offer includes a list of potential casino operators that Chow Tai Fook is considering for the development.

Minister of Tourism Obie Wilchcombe said: “Chow Tai Fook Enterprises has submitted to the government of the Bahamas proposals for the hotel and the casino, and the government of the Bahamas is now looking at what they have submitted. We got it in last week. They’re going to pretty much follow what they’ve done in other jurisdictions where they have major casino operators from veterans in the industry. We’re looking at all the components, we have to take a look at what they do now. They’ve given us a list of players that we’re doing due diligence on.”

A spokesperson for Chow Tai Fook added: “As part of the company’s commitment to the project and the Bahamas in the immediate term, CTFE will invest millions ahead of the official deal completion through pre-opening activities and employment, which has already commenced and will be expanded in the coming weeks and months.”