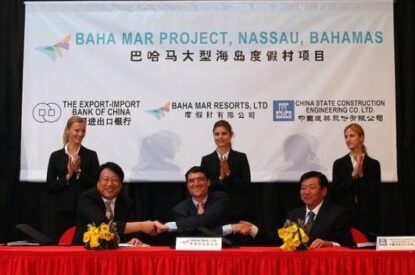 BML Properties, the company initially behind the blueprint and build of the Bahamian casino resort Baha Mar, was celebrating its first victory in court in its $2.25bn fraud and breach of contract claim against the resort’s contractor.

Justice Saliann Scarpulla’s ruling forces CCA to now file a formal defence to the Lyford Cay resident’s allegations by February 13, 2019, while keeping the dispute before the court and thus in the public domain.

The Chinese state-owned contractor had wanted the case transferred from the court room to a private mediation hearing.
BML said: “In sustaining BML Properties’ fraud and other claims, the New York judge quoted from a January 20, 2015, letter secretly sent by the defendants which stated that if CCA America did not correct their serious problems, the result would be ‘irreversible and catastrophic loss’ and ‘immeasurable damages’.”

“BML Properties alleges that defendants failed to report accurately, or at all, the true state of its scheduling, deadline compliance, the amount or experience of its workforce and status of its procurement. BML Properties contends that the accuracy of the defendants’ reporting directly affected its ability to predict and protect against risks to its equity investment. Despite defendants’ repeated assurances, the project’s most important building, the Convention Centre, was not timely completed.

“BML Properties alleges that defendants made false representations regarding the progress and status of the project.
She also kicked out the claim that Mr Izmirlian and BML Properties could not claim “direct claims for a loss in the value of [their] equity investment as the loss simply reflects damages incurred by the company (Baha Mar)”.
The New York court ruled that the original Baha Mar developer had enough evidence to ‘sufficiently plead’ fraud due to the high level of e-mails, documents and meetings referenced.

Justice Scarpulla said: “The crux of the fraud claims is that CCA, from 2012 through 2015, fraudulently misrepresented its existing workforce, available resources and ability to complete the Project to BML Properties, preventing the latter from seeking remedies at the time of the misrepresentations or mitigating their cumulative effect and averting added losses. I find that the arbitration clause is inapplicable and deny defendants’ motion to compel arbitration.”

CCA slammed the lawsuit as ‘a vindictive and baseless attempt to redeem his own failures to properly manage his companies and their investment in the Baha Mar resort project.’

The Bahamas’ Progressive Liberal Party (PLP), which was in power at the time of the fall-out, said Mr. Izmirlian was ‘vindictive’ and ‘seeking revenge to injure the Bahamas.’

PLP Chairman Fred Mitchell said: “When one looks at the words of the documents filed, this seems nothing more than a rehash of the narrative which Mr Izmirlian is determined to tell, although the actual facts bear no reality to his narrative.”

The next round of legal wrangles will take place on February 27, 2019 when both parties retrun to court.