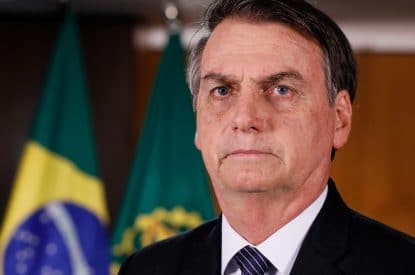 During a lunch with journalists at the Palácio da Alvorada, Brazil’s official residence, President Jair Bolsonaro stated once again that he was against gambling and that he would veto gambling laws now being developed in the House of Deputies.

President Bolsonaro hinted that Congress was moving towards legalisation and that it would ultimately approve the bill despite his veto. “My position is clear. From what I’ve seen, by the amount of votes and urgency, they can overturn a possible veto. I intend to veto the issue of games in Brazil,” he said.

Bolsonaro has already said that he intended to veto the legalization of gambling in Brazil. In September Bolsonaro told press that supporters of the bill in the lower house had already approached him, but he had told them that the measure would not have his support.

“I think there will be more to lose than to win at this time. If they approve it, I have my veto, which is normal, and then Congress can override it. Yes, what is being discussed so far will have my veto, period,” he said in an interview with Veja magazine last year.

Leaders argue that a veto by Bolsonaro, in case the bill is approved, would give more time for the religious group in Congress to rally against the issue.

In December The Chamber of Deputies approved the request to deal with bill PL 442/91, which legalizes casino and other types of gambling in the country, as a matter of urgency. The motion was passed after President of the Chamber of Deputies Arthur Lira held meetings and negotiated between the leaders of different political groups including the opposition. Lira announced that Gambling Bill PL 442/91 would be debated in the House of Deputies in February 2022. Legislators will be able to submit amendments to the bill before then.

Passos said that the only organized opposition to the project comes from the evangelical bench. “I’ve already debated with evangelical leaders and I respect their opinion. But I don’t understand why they are against it. They say it increases addiction, but the person who is addicted gambles clandestinely”, he said.

In addition to evangelicals, Passos said that he is aware that President Bolsonaro is publicly against the proposal, but stated that he did not foresee any problems. “[Bolsonaro] will veto. First we’re going to approve it in the Chamber, then in the Senate. If we approve it, we will overturn the veto”, he said.