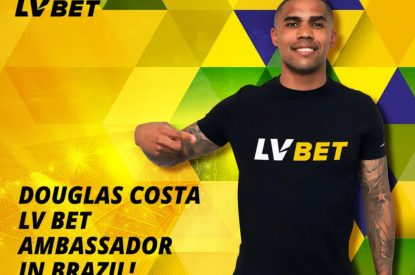 LVbet, the online sportsbook and casino brand, has unveiled Douglas Costa, the Brazilian international midfielder, and UEFA Champions League star, as its Brand Ambassador for Brazil. Douglas Costa, who has represented the Brazilian national team over 30 times and won many domestic titles around Europe, will feature in LVbet’s marketing and promotions in Brazil.

The 30-year-old, currently enjoying his spell with Bundesliga giants Bayern Munich FC having also starred for Juventus FC and Shakhtar Donetsk FC. He will also share expert insight and opinions in his role with the leading gaming brand, as it prepares to launch in the sports-mad South American market.

“I’m delighted to sign for LV BET as Brand Ambassador as they enter the Brazilian market. They are an ambitious team with big plans and it’s my privilege to help them by giving my views on football.” – said Douglas Costa, a member of Brazil’s 2018 FIFA World Cup squad.

Adrian Sidowski, LV BET Chief Executive Officer, commented: “Having Brazilian football international Douglas Costa on our side as we begin this new chapter in Brazil, is something we’re really excited about. With a competitive product offering, we’re looking to leverage Douglas Costa’s status to help us penetrate the market.”

“We’re delighted to have Douglas Costa as our Brand Ambassador, which will elevate our standing in Brazil. He fits perfectly with LV BET, with the energy, commitment and drive he shows on the pitch matching our philosophy as a brand. Working with Douglas Costa will not only provide LV BET with greater brand awareness in the Brazilian market but will also allow us to build trust in a new market.” – said Marcin Jablonski, LV BET Chief Commercial Officer.

LV BET’s match-up with Douglas Costa is its latest partnership as it establishes a significant presence in sport through numerous prestigious strategic partnerships. LV BET is the Main Sponsor of Polish top-tier Ekstraklasa football club Wisla Krakow, and an Official Betting Partner of England’s Vanarama National League LV BET is licensed by regulators in the United Kingdom, Republic of Ireland and Latvia. The operator, which is registered in Malta and operates under EU law, offers a wide range of pre-event and in-play sports-betting markets, as well as a multitude of online casino games.