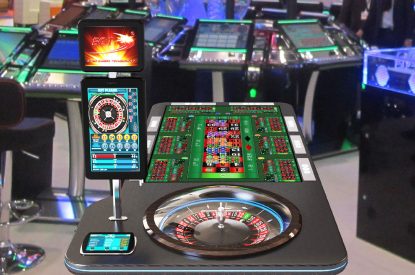 The EGT Luxury Touch Table won an award at G2E last year and has already been installed in 50 casinos, including WINBET in Bulgaria, Casino Advanced Technology, France and Casino VINMOE in Ireland.

Tihomir Asenov, Research Manager at EGT, said: “Our concept in
creating the EGT Luxury Touch Table was to increase the pace of play increasing profitability, and to reduce the operating costs and the chances of discrepancies. We have realised a completely new and elegant luxury version of roulette, a traditional casino game. It has been specifically projected to cater for big casino interiors and combines the latest digital innovations in the industry with the live table experience of having a real wheel and a live dealer to spin it.”

Mr. Asenov continued: “Whilst there are 84” multi-touch screens on the market, there was no product offering independent playing areas on a large table. Our partner Elatec recommended Zytronic to provide the technology to create this concept. We had a very successful partnership with Elatec and the R&D team at Zytronic. In delivering a completely new approach like the Luxury Touch Table there are always technical challenges to overcome, and together, the three companies worked together effectively to achieve a panel that is robust and reliable.”

Zytronic is supplying 84-inch diagonal anti-glare treated glass panel, equipped with either six 21” or eight 19” separate touch zones around the perimeter of the screen. Each playing area is supported by its own ZXY100 touch controller. These touch areas are seamless, without bezel or border, blending into the overall display. Furthermore, the 6mm thick, screen printed glass is thermally toughened to resist deliberate or accidental damage.
The Luxury Touch Table is offered in three variants: live wheel, automatic wheel or lucky circle cash generator.

Bets and payouts are identical to those in effect at a traditional roulette table with EGT’s proprietary technology identifying each person’s bet and handling the “virtual” chips accordingly before automatically calculating the winnings. In contrast to traditional roulette games which average around 35 games per hour, the new EGT tables are capable of producing between 60 and 80 results per hour, enhancing the venue’s return on investment.