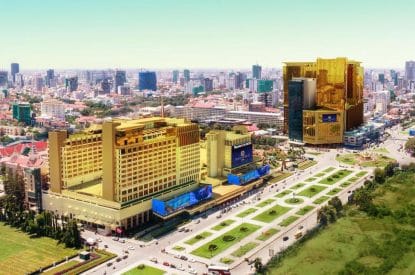 The satisfactory recovery of the gaming business volumes and revenues was largely contributed by a reasonably sized expatriate community and to some extent, visitors from East Asia (mainly from China, South Korea and Taiwan) patronising NagaWorld in search of entertainment. With its attractive and quality facilities and located strategically in the city-centre, NagaWorld has since its inception been the focal point of leisure and entertainment activities in Phnom Penh. Hence, despite the prolonged regional travel restrictions and reduction in most international flights, the Group’s Mass Market segment has been quite steady.

Cambodia ranks No. 1 in Asia and No. 3 in the world, out of 166 countries, with the best effective measures to contain the spread of COVID-19 and to handle pandemic’s fallout

Since its inception, the group believes that investing and emphasizing on the mass market is the foundation of a steady source of revenue which generates higher margin as reflected and proven on the published yearly results.

Analysts do not believe the current closure, following 11 members of staff testing positive for coronavirus, to impact the business too much.

Union Gaming analyst John DeCree said: “While the length of the closure is uncertain, we do not expect it to be anything like the multi-month closure in 2020,” said DeCree, pointing to NagaWorld’s’ three-month closure stretching from April to June of last year. The quarantine period in Cambodia is two weeks, but we suspect it could take a little longer to reopen out of an abundance of caution.

“Like the previous reopening, we suspect pent-up demand will return quickly when operations resume. Looking ahead, Cambodia received nearly 1 million vaccines so far, which should go a long way in combating the pandemic and helping to open up some international travel,” he added.