Canada – Century Mile Racetrack and Casino to open on April 1 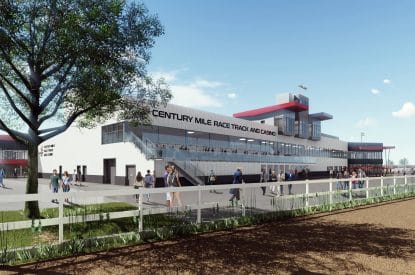 The horse racing season is scheduled to start with thoroughbred racing on the one-mile racetrack for the first time on 28 April. A grand opening gala is planned for the evening of April 27.

Century Mile features a casino and grandstand building with a total of 89,700 square feet on several floors. Amenities on the first floor include a casino, which will initially have 550 slot machines and electronic table games, 38 stadium-style games, 14 video lottery terminals, a restaurant, a horse betting area, a bar and a lounge. On the second floor there will be tiered indoor and outdoor grandstand seating, three private suites and viewing areas, all overseeing the racetrack, a bar, a horse betting area, a buffet and a grill. On the third floor an open patio will provide stunning views over the racetrack and paddock.

Century Mile Racetrack and Casino is the company’s latest development, located on Edmonton International Airport land and close to the city of Leduc, south of Edmonton. The location is ideally positioned exiting off the Queen Elizabeth II Highway, which is the main corridor between Calgary and Edmonton and one of the most heavily used highways in Western Canada. It is close to the airport, a shopping mall, retail outlets, hotels, a golf course and an abundance of other businesses. The company is investing approximately US$46.6m, based on the exchange rate in effect as of 26 February 2019, in the development.

On the 100 acres of land, the company also built barns with a capacity of 800 stalls including all amenities needed by horsemen and trainers, as well as 1,700 plus car parking stalls. The one-mile racetrack features many desirable characteristics most notably the 1,280 foot homestretch, making it one of the longest in North America.

The main racing events at Century Mile throughout 2019 will be the Oaks and Derby Preview on Canada Day, 1 July, the prestigious Packwood Grand event on 17 August, the $150,000 Grade 3 Canadian Derby on 18 August, followed by the $130,000 Western Canadian Pacing Derby, the $130,000 Don Byrne Memorial on 15 September and wrapping up with the $350,000 Alberta Superfinals on 2 November