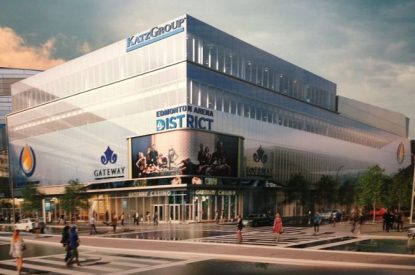 Gateway Casinos & Entertainment is to close the Baccarat Casino in Edmonton and replace it with a new premier, upscale casino and entertainment property in the Edmonton Arena District.

The project will bring up to 200 new permanent jobs and a $32m investment to the Edmonton economy. In addition to this long-term investment, the project will result in 450 person years of construction employment.

Gateway will build the Grand Villa Edmonton Casino, Gateway’s most premium brand, featuring a spectacular gaming floor with exciting entertainment and an array of dining and culinary options to suit any taste including their signature restaurant – Match Eatery and Public House.

With over 60,000 square feet of entertainment space, the Grand Villa Edmonton will be an exceptional addition to EAD. Construction is to begin in fall 2015 with a grand opening scheduled for summer 2016.
“Gateway Casinos & Entertainment Limited is an established gaming and entertainment operator in Western Canada,” said Daryl Katz, Chairman of Katz Group. “We believe this new, full-service, upscale casino will be a valuable and exciting addition to the Edmonton Arena District and will provide patrons a first class experience.”

“At the AGLC we strive each day to create progressive, socially responsible gaming experiences for
Albertans,” said Niaz Nejad, Vice President Lottery and Gaming Services, AGLC. “The construction of a first class gaming facility in the Edmonton arena district will provide Albertans with a dynamic and modern entertainment option.“