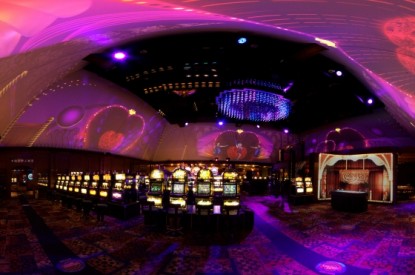 One of The Gaming Standards Association’s operator members has capitalised on the freedom built into GSA’s Game To System (G2S) standard to create a new application for the casino’s unique use.

“Casino de Charlevoix wanted to create a promotion with advanced multi-media presentations that would immediately and dynamically communicate directly to customers throughout the casino on large display monitors. They needed information from existing slot machines to make the promotion work, so we helped them tap into the existing G2S port on the game, created a simple engine application that connected to their new promotion application, and in less than 90 days, their goal was realized,” said Russ Ristine, President of Radical Blue Gaming.

The G2S-powered application empowers Casino de Charlevoix to communicate a wide range of messages directly to customers – from jackpots to available seating – all designed to generate excitement and drive traffic.

“This is incredibly exciting. We have been telling operators that G2S and GSA standards will directly benefit them, and now here is a concrete example of G2S’ flexibility at work,” said Peter DeRaedt, GSA President.

“The beauty of G2S is that it’s like a dictionary. Operators can use their creativity and say, ‘We want to do something completely new,’ and then we go to the dictionary, find the right words to make it happen, and just like that, they are running a successful promotion,” said Ristine.

Casino de Charlevoix reported instant success with the new application. “The launch was great. Everyone was amazed, and the machines were busy all weekend long the very first weekend we launched the promotion,” said Nathalie Rajotte, Ingenio’s Director General.

“What Casino de Charlevoix and Loto-Québec have clearly demonstrated is that GSA’s standards give operators the freedom to dream. A new day in gaming has arrived,” DeRaedt said.

Take the virtual tour at http://www.casinosduquebec.com/charlevoix/fr/jeux/multimedia