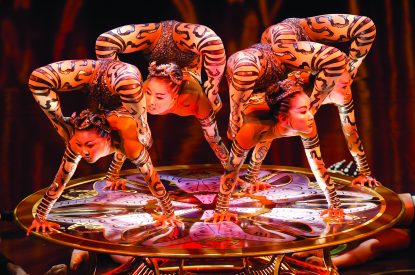 MGM Resorts is tickling Toronto City Hall’s taste buds with the suggestion of a Cirque du Soleil show for Canada’s largest city, similar to its shows in Las Vegas.

MGM’s senior Vice President of Public Affairs, Alan Feldman said that the venture could end up being added: “Our colleagues at Cirque would love to have a permanent home in Toronto. They see, as we do, this incredible cosmopolitan global destination, one that would work very well for them.”

Mr. Feldman however added that the project could involve a resident circus theatre, a themed nightclub or ‘several things.’

MGM Resorts is teaming up with Cadillac Fairview Corporation Limited to form a 50/50 joint venture with the purpose of bidding for, developing and operating the destination-style, integrated resort complex within the Greater Toronto Area.

Cadillac Fairview will bring its extensive Canadian development experience to jointly conceive a project that includes entertainment, gaming, hotel, retail and conference facilities. The joint venture will design, develop and construct the resort under one or more brands owned by MGM.

John Sullivan, President and CEO of Cadillac Fairview, said: “Cadillac Fairview recognizes the enormous benefits that can accrue to the city of Toronto from an integrated resort and we’re proud to partner with MGM Resorts to develop this exciting project. The City of Toronto staff report has identified how such a project will create thousands of jobs, contribute much-needed revenue to the city and provide Toronto with an iconic landmark to attract millions of tourists. We look forward to working with city officials and community stakeholders in support of Council’s decision on the optimal site for an integrated resort, and to maximize its benefits to the city through a fair and competitive process.”

Highlights of the project’s preliminary design and scope include a permanent Toronto Cirque Du Soleil experience as well as a partnership with noted Toronto restaurateur Mark McEwan to develop new dining concepts for the integrated resort.

MGM Resorts Chairman and CEO Jim Murren added: “From the start MGM sought to partner with a Canadian company that shares our values of sustainable design, service excellence and commitment to city-building. In Cadillac Fairview we are partnering with the industry leader in developing high quality properties across North America and a company with whom we share a common vision for the development of an iconic integrated resort in Toronto.”

However one observer in the theatre sector is not convinced the Cirque du Soleil proposal would actually come off.

Wayne Leung, Managing Editor of the Toronto-based Mooney on Theatre website, said: “The second part of Feldman’s statement that the project could be a nightclub “or something”, has some precedent. Cirque has moonlighted in creating upscale ‘ultra-lounge’ nightclubs. However, if you’re making grandiose statements about bringing Cirque du Soleil to the table as a partner for a casino-resort project anything short of a full-fledge resident show would be an utter disappointment. There’s a key difference between MGM’s Vegas property and any potential Toronto casino. MGM owns its Vegas properties and reaps all the revenue generated whereas they would only be a “private operator” contracted to run the facility in Toronto and paid a set fee for doing so by the Ontario Lottery and Gaming Corporation. MGM would be less likely to incur the financial risk of running a money-losing show as a loss-leader if they don’t directly benefit from the increase in gaming revenue.

“This isn’t the first time Cirque du Soleil has been down the path for a downtown waterfront casino proposal in a Canadian city,” Mr. Leung added. “ In 2005, Cirque was part of a partnership to build a new resort facility for the Casino de Montréal in that city’s Peel Street Basin. Cirque pulled out of the project after the negative publicity from the fierce public outcry against that project. This Toronto project could be history repeating itself.”