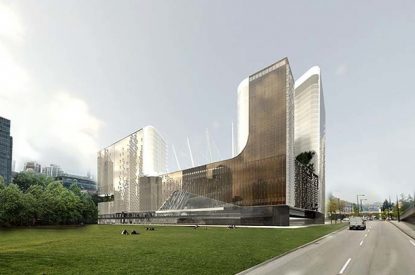 Its developers stated that Parq will be the centerpiece of a re-envisioned entertainment district adjacent to BC Place Stadium. It will be home of the largest hotel convention facility in Vancouver with nearly 62,000 square feet of meetings, conference and special event space – including Vancouver’s largest ballroom.

“Vancouver is one of the world’s most desirable travel destinations and this remarkable property will not only reinvigorate part of downtown Vancouver, but also provide visitors and residents with an entertainment destination that rivals the best anywhere,” said Scott Menke, president, Paragon Development in a media release. “We are excited to build a landmark that will maintain the integrity of Vancouver’s unique local culture and are thrilled to see this important resort come to life in the coming months.”

Parq will feature the province’s first JW Marriott hotel. The property will have 288 guest rooms and 41 suites. Adjacent to the JW Marriott will be The Douglas, which is part of Marriott International’s Autograph Collection.

Named for the celebrated Canadian botanist and explorer David Douglas, namesake of the stately Douglas Fir trees abundant in B.C., The Douglas will offer 178 rooms and 10 suites.

Nearly 1,100 new parking spots will supplement the existing parking options near BC Place.
A mix of entertainment and leisure offerings, a spa and wellness sanctuary and a restaurant program will round out the project.