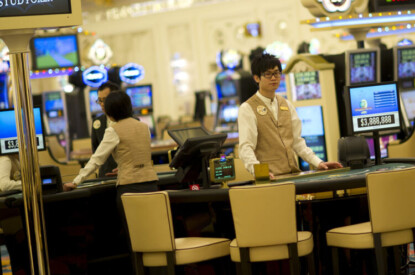 Analysts at JP Morgan believe Macau’s casino EBITDA could be just five per cent off pre-pandemic levels by 2024 with a double of mass gaming tables via new laws on table limits.

JP Morgan analyst DS Kim believes that the potential of gaming taxation being reduced on the back of more international tourists being attracted to the market will prove a huge plus for casino operators. He also believes that the introduction next year of a marker-wide table cap of 6,000 will be aided by the removal of junket VIP tables.

He explained: “The table cap is less meaningful than it looks. The number of tables will remain capped at current capacity of 6,000 for the next term, as the government won’t grant additional gaming land or capacity. However, this doesn’t mean growth will also be capped, as there is more than enough excess capacity in the market.

“We estimate there were only about 4,000 mass tables directly operated by casinos (excluding junkets and satellites) in 2019 (peak for mass GGR), so the table cap of 6,000 presents significant headroom … theoretically, up to 50 per cent additional capacity for mass,” he added.

“Pent-up demand is real for most markets and should be the case for Macau’s mass and non-gaming. It boils down to Macau’s accessibility, and a series of recent events makes us feel confident in the direction of mobility easing within China, which we view as the only missing piece for Macau’s recovery, given e-visa resumption last month.”

“We maintain our model for mass and non-gaming demand to recover fully during 2024, but we place VIP numbers at near-zero levels, as this segment has probably been structurally impaired,” Kim added. “Yet thanks to the high-margin nature of mass and solid cost-saving efforts, we still expect industry EBITDA to recover to 95 per cent+ of pre-COVID-19 levels by 2024.”