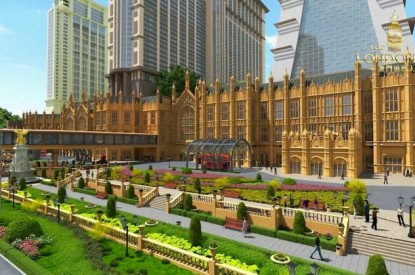 Las Vegas Sands has confirmed that the coronavirus pandemic has done little to slow the opening schedule for its The Londoner Macao, the rebirth of the company’s existing Sands Cotai Central Cotai Strip integrated resort, which will open progressively from 2020 to 2021.

The first phase of Sands China’s US$2bn The Londoner Macao will be completed by September.

Sands China’s President Dr Wilfred Wong said: “Our construction progress was not postponed, but has been even faster than expectations since there have been no tourists. The Londoner Macao will open in phases in 2020 and 2021 but the majority of construction has been completed. Only the façade is still waiting for the government’s approval. We hope the pace (of The Londoner Macao’s opening) will have consistency with the government’s border reopening policies. Once we have enough visitors, we could open the Londoner Macao at any time.”

Bringing together the very best of this iconic city, from spectacular recreations of world-famous landmarks to uniquely London-inspired public spaces, accommodation, restaurants, retail and entertainment, The Londoner Macao is a celebration of timeless British design. The experience begins with the exterior facade, modelled on the iconic Palace of Westminster and Houses of Parliament, complete with the 96-metre Elizabeth Tower and spectacular clock face. As guests arrive, the grandeur of the glass canopied porte cochere with cobblestone paving recalls the capital’s most famous train station, Victoria. The grounds and gardens surrounding The Londoner Macao are modelled on the great London parks and gardens and were especially inspired by those at the royal residence of Kensington Palace.

The space that greets guests upon passage into The Londoner Macao is nothing short of spectacular. Crystal Palace is a light-filled, palatial atrium, modelled on Claridge’s of London and the Palace Hotel, exemplifying the greatest in Victorian design and construction in glass and iron. Moving into the lobby guests will find a stately and refined space, inspired by contemporary formal drawing rooms of glamorous British manor houses. The space envelops visitors with the grandeur and warmth of sumptuous British luxury. The design of the interior is derived from ancient classical architectural orders which were the inspiration for many of the great estates, manors and palaces of historic England. From here guests are invited to explore numerous restaurants, retail offerings and entertainment found in the lively streets and lanes of London.

The Londoner Macao features four world-class hotel brands in one location – The Londoner Hotel (luxury all-suites with 594 keys),The Londoner apart-hotel (368 apartments) adjacent to The St. Regis Macao, plus Conrad Macao (654 rooms), Sheraton Grand Macao Hotel (4,001 rooms) and The St. Regis Macao (400 rooms). This gives visitors to Cotai an expanded choice of luxury and mid-scale hotel offerings in one location, with over 6,000 hotel rooms to choose from. The Conrad Macao and Sheraton Grand Macao are the world’s largest hotels in their brands respectively.