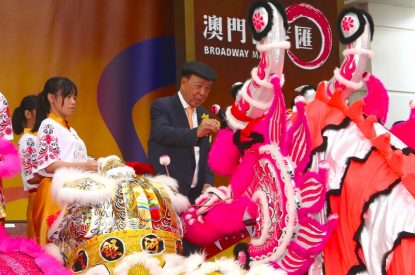 The new chapter of Galaxy Macau and Broadway Macau opened its doors witnessed by government officials, high profile dignitaries, socialites and celebrities on May 27.

The resort, billed as the Most Spectacular Entertainment and Leisure Destination in the World, has doubled in size in just four years, now standing at a total of 1.1m square meters. It is also the first major resort to open in Macau since 2012, marking a new milestone for the city.

Queues of guests began forming outside in the early hours of the morning, awaiting a chance to explore and experience the greatly expanded resort in particular the non-gaming facilities, such as dining outlets and shopping and to discover the new and unlimited world-class attractions and entertainment on offer. Galaxy Macau and Broadway Macau marks HK$43bn of a HK$100bn planned investment by Galaxy Entertainment Group in Macau and over 95 per cent of the total floor area covers non-gaming amenities and entertainment, fulfilling its potential as a ‘World Center of Tourism and Leisure’.

During the ceremony, a traditional lion eye-dotting was performed by the officiating guests to symbolize a future of prosperity and good fortune for the new chapter of Galaxy Macau and Broadway Macau, followed by a spectacular and colourful display of two 138 foot long beautifully crafted dragons, along with 16 lions which set off 888,000 firecrackers across the entire resort. A procession of jugglers, acrobats, ribbon dancers and drummers entertained the crowd before the officiating guests cut the ribbon to signal the official opening of the brand new chapter of Galaxy Macau and Broadway Macau.

Dr. Lui Che-woo, Chairman of Galaxy Entertainment Group, said: “Being a Chinese company, GEG is rooted in Macau. We are committed to nurturing local talent and promote local culture to support the economy. We fully support the Central Government’s goal towards the stable economic development of Macau. We also firmly believe that as long as all walks of life in Macau are united, Macau will have a better and brighter future. Galaxy Entertainment Group is a patriotic company. We are loyal to the central government’s vision and hope that the territory fulfils its goal of turning Macau into a global centre of tourism and leisure.”

Although it asked for 400 gaming tables, Galaxy Macau was only allowed 150, a situation Dr. Lui Che-woo said he was ok with.

“We understand the SAR government when it comes to a transition to a diversified market. Things have evolved. It is about how to wisely use the tables in the face of new challenges,” he said.

The event was attended by A-list celebrities, including reigning Miss Universe from Columbia, Paulina Vega Dieppa, Canto pop legend Andy Hui, popular artist Chi-lam Cheung and singer Linda Wong. At the gala dinner, dignitaries and VIP guests were entertained by the first and only Chinese singer to perform at the Academy Awards, Coco Lee. The doors to the world’s most spectacular entertainment and leisure destination then opened to welcome guests from all over the world. Colorful performances burst to life simultaneously across Galaxy Macau and Broadway Macau. Celebrations also kicked off at The Promenade where guests enjoyed unlimited style with champagne tastings, retail showcases, live model window displays and fusion jazz music from live band Siu2.

Guests then made their way to Broadway Macau across the air-conditioned Skybridge – just a 90-second walk from Galaxy Macau. The Broadway, a first-to-Macau vibrant street and entertainment district and new landmark destination for the city, showcased the very best in Macau and Asian cuisine. Performers provided up-close-and-personal entertainment supported by local entertainers to the assembled VIPs and guests on the unique ‘Band on the Run’ stage – a mobile performance venue and another first for Macau.
The guests were also treated to starring acts including Korean girl group T’ARA and DJ stylings of the Ministry of Sound. Broadway Macau, which boasts the brand new Broadway Hotel and the 3,000-seat Broadway Theatre, will showcase the best in up-close-and-personal entertainment, including a live performance from Alan Tam, whose 40th anniversary concert this weekend is a sellout.

The whole of the Macau gaming sector is still facing huge challenges. Revenue for the sector has slumped by 40 per cent but still dwarfs the success of any other gaming region. The six licence holders will be under even more scrutiny with a review of the gaming licences between 2020 and 2022.
Dr. Lui Che-woo added: “I believe that Galaxy is one of the companies that has done the most for this community. We are confident we will be looked on favourably.”