China – Galaxy reports another record in the first half of 2014 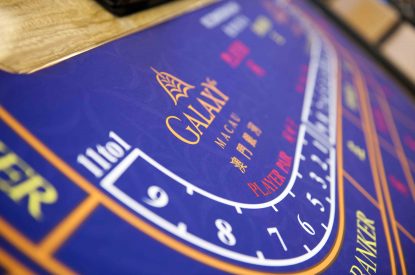 Despite a softer economy, the effects of the FIFA World Cup and player issues over credit, Galaxy Entertainment recorded group revenue and earnings were in the first half of the year with revenue climbing 25 per cent year-on-year to $38.4bn.

Adjusted EBITDA surging 26 per cent to $7.3bn whilst net profit attributable to shareholders reached an all-time high of $6bn up 29 per cent year-on-year. Gaming revenue grew 24 per cent year-on-year to $38.2bn in the first half of 2014 driven by healthy growth in both mass and VIP. Total mass revenue increased 28% year-on-year to $9.9bn while total VIP revenue grew 24 per cent year-on-year to $27.5bn.
Dr. Lui Che Woo, Chairman of GEG said: “We celebrated our ten year anniversary in Macau after achieving another half year of record financial results. Our continued success lies in consistently delivering memorable leisure and entertainment experiences to guests through our spectacular high quality resorts and our exemplary ‘World Class, Asian Heart’ service standards.”

During the half year we made excellent progress in realising our primary strategic objectives across our flagship properties including enhancing our existing operations as the market evolves and building foundations for the Group’s long term sustainable growth. We are confident that Phases 2, 3 and 4 of GEG on Cotai, re-launching the Grand Waldo Complex, and our conceptual plans for Hengqin Island will enhance Macau’s world-wide reputation as a tourism capital, catalyse our earnings growth and maximise long term shareholder returns.”

The Macau gaming market saw healthy growth in the half year as total gaming revenue increased by 13 per cent year-on-year to $187.5bn. Second quarter revenue grew at a more modest six per cent year-on-year, largely as a result of more cautious spending due to a softer economy in China and the distraction of the 2014 FIFA World Cup. However, visitor numbers to Macau jumped eight per cent to 15.3m, a faster rate of growth than that achieved in the same period last year. Arrivals from Mainland China now account for 67 per cent of total visitors.

Galaxy Macau celebrated its third year anniversary in May 2014, and remains the key growth driver in the Group. First half revenue increased by 38 per cent to a record $25bn against the same period last year.

Revenue in the mass segment was $6.4bn, up 32 per cent on 1H 2013. Second quarter revenue increased by 19 per cent year-on-year to $3bn, but dipped nine per cent sequentially as June and subsequently July were impacted by the FIFA World Cup.

StarWorld Macau delivered solid half year results. Revenue increased by seven per cent year-on-year to $12.3bn, and Adjusted EBITDA climbed nine per cent to $1.9bn. These results were achieved on the back of strong growth in the mass gaming segment, and VIP revenues coming in slightly ahead of the same period last year despite significant bad luck in the second quarter.

Second quarter Adjusted EBITDA was $822m, down seven per cent year-on-year due primarily to the worst VIP luck quarter in history. StarWorld Macau reported the latest twelve months ROI of 109 per cent compared to 92 per cent for the same period last year.

StarWorld Macau’s electronic gaming generated revenue of $100m, down 11 per cent on last year as a result of lower hold. Second quarter net win was in line with the same quarter last year, and broadly in line with Q1 2014.