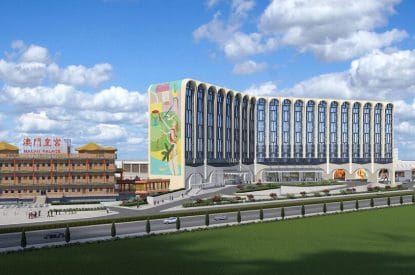 Macau Theme Park and Resort has unveiled its plans for its inaugural integrated resort project, Lisboeta, on Cotai, Macau. Being built adjacent to SJM Holdings’under construction Grand Lisboa Palace and currently does not have a casino associated with it.

The Lisboeta will recreate the former floating casino Macau Palace, which enjoyed a colourful history as a symbolic landmark in Macau, even attaining a feature in the 1974 James Bond classic film “The Man with the Golden Gun”. It will also include Zip-line 388, Asia Pacific’s first urban zip-line attraction, indoor skydiving, the first in the South China region and Macau’s very first IMAX and MX4D theatres.

Arnaldo Ho, founder of Lisboeta and Director of MTPR, said: “The Lisboeta will be a Macau-themed integrated resort guaranteed to bring happiness to Macau citizens and tourists, by offering a comprehensive experience filled with nostalgia, distinguished themed hotels, adventurous attractions and immersive cinema. The Lisboeta will be a forceful injection of unique tourism assets to Macau’s portfolio for sustainable development.”

The unique Macau-themed integrated resort is the first of its kind, and will introduce many offerings new to Macau and the region, delivering an all-encompassing experience sure to entice guests of all ages, especially families and a younger demographic.

The Lisboeta’s overall design concept pays homage to ‘old Macau’, incorporating details inspired by iconic buildings etched into the collective memory of Macau locals, such as Hotel Estoril, floating casino Macau Palace and New Central Hotel. The two thematic zones in the integrated resort, namely Retrospective Macau and Future Macau, aim to showcase the development of the vibrant city since the 1960s, as well as envision its exciting future and potential.

Mr. Ho added: “In recent years, we have seen many beautiful, modern resorts and attractions with all kinds of themes developed on Cotai. However, there is little to be seen of the original, authentic Macau which is characterised by the many architectural icons developed by my father, Dr. Stanley Ho. Therefore, my idea behind the Lisboeta is not only to evoke nostalgia for the old times, but also revitalise those memories of Macau with fresh new concepts.

“The significance of the name Lisboeta, which means ‘the citizens of Lisboa’ in English, is twofold: it represents the deep bond between Lisboa and Macau, as well as the close ties between our brand and our patrons. Likewise, the Lisboeta is a project dedicated to the Macau people, who manifest the culture and heritage of this city. The integrated resort is set to open in 2020 as a premier integrated entertainment and leisure resort in Macau and regionally.”

The Lisboeta will offer 820 guestrooms across three hotel brands in a 12-storey hotel tower. Serving as a bridge connecting the Retrospective and Future zones of the integrated resort, the tower has incorporated Macau’s quintessential architectural characteristics into the exterior design, such as the curved rooftop and facade mosaic of the Hotel Estoril. All rooms and suites will be operated by MTPR.

The Lisboeta Hotel contains 574 rooms and suites with interior design evoking 1960s Macau, enhanced with modern twists to traditional elements such as the folding doors of Macau shops to reflect the evolution of Macau from the past to present. The rooms’ family-friendly design will provide an overall homey ambience.

The first of its kind in the world, Maison L’OCCITANE hotel has 164 rooms and suites boasting designs inspired by Provence, the south of France from where the internationally renowned natural well-being product brand originated.

The 82-room Casa De Amigo, which is created as the first themed hotel in the world that fully designed by Line Friends.