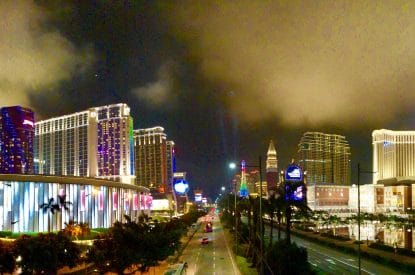 Macau’s incoming Chief Executive Ho Iat Seng has lent his support to an upper limit on the number of casino licences allowed in the upcoming revision of Macau’s gaming law.

Amendments to Macau’s gaming laws have been drafted and will be brought in in 2022. Some operators had hoped that with two plots of Cotai land previously earmarked for casino development still available, more licences would be issued.
Junket operator Suncity Group had been tipped as a forerunner if more licences became available whilst existing operator SJM had previously highlighted its hope to develop more satellite casinos from its existing licences. Macau businessman Chan Meng Kam owner of Golden Dragon Group had also hoped to bring smaller gaming floors to its four existing Macau hotels.

Mr. Ho will take up his new role in December when he replaces Fernando Chui during Macau’s 20th anniversary of being returned from Portugal to China.

He also referred to Macau’s ‘one country, two systems’ principle with China, stressing that Macau could ‘prevent interference by foreign influences’ promising to ‘make use of our law to safeguard the ‘one country.’
“I will unswervingly carry out my duties and governance in strict accordance with the constitution and the basic law to serve the people, the SAR and the country,” Mr. Ho said, adding that Macau had ‘a high degree of autonomy.’

August’s revenue total from Macau’s casinos came in at US$3.01bn, down 8.6 per cent in August year-on-year. This fell way below analysts’ predictions of a two to six per cent decline with slow economic growth due to China’s trade war with the United States and protests in neighbouring Hong Kong both to blame. Revenues are also thought to have been affected by Suncity CEO Alvin Chau’s ban from travelling to Australia following media claims that he may have links to criminal organisations in China. Suncity has moved to close all its VIP rooms in Australia due to their ‘high cost.’

Vital Umansky, an analyst at Sanford C. Bernstein, said: “The negativity surrounding Suncity continues to pressure junket VI, as some agents withdraw some funds and some VI players delay visiting Macau. Overall negativity surrounding the geopolitical and macro situation continues to have impact on GGR. The protests in Hong Kong may have also caused some transport disruption and created a headwind to China visitation into HK (and onward visitation into Macau). But we believe the impact from the HK protests has been immaterial.”