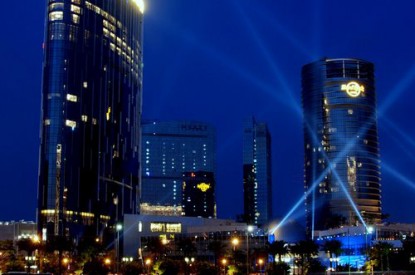 The results were announced on the same day a Taiwan subsidiary of the company was indicted for alleged foreign exchange violations.

Shares in the operator, owned by Lawrence Ho and James Packer, fell by 3.9 per cent to $HK75.55, the lowest in almost a year.

Net revenue for the second quarter of 2014 was US$1,199.5m, representing a decrease of approximately seven per cent from US$1,295m for the comparable period in 2013. The decline in net revenue was primarily attributable to lower group-wide rolling chip revenues, partially offset by improved mass market table games revenues.

The net loss attributable to noncontrolling interests during the second quarter of 2014 of US$17m related to Studio City and City of Dreams Manila.

Lawrence Ho, Co-Chairman and Chief Executive Officer of Melco Crown Entertainment, said: “In the second quarter of 2014 we delivered solid underlying financial performance, driven primarily by our mass market table games business at City of Dreams where revenues increased approximately 38 per cent on a year-over-year basis.

“To ensure our properties are well positioned for the future, we continue with our market leading table and room optimisation process, which has resulted in a further shift of tables in to the mass market segments at City of Dreams, while also making substantive improvements in the positioning and, in the case of City of Dreams, amenities available to visitors to Macau who continually seek a more diverse entertainment offering,” he added.

“We continue to make meaningful enhancements to the amenities at City of Dreams, including the recently opened lifestyle entertainment and dining precinct, called SOHO, located on the second floor of City of Dreams, together with a substantial expansion of the property’s luxury retail offering which is anticipated to be operational in 2016, expanding the integrated resort’s appeal to a wider array of customers.

“Our unique and exciting development pipeline moves closer to realization. City of Dreams Manila is due to open later this year, marking Melco Crown Entertainment’s evolution into a regional player in the gaming and entertainment industry. Studio City, our second large-scale resort in Cotai, remains on track to open in mid-2015, representing the next standalone integrated property to open in Macau, delivering an entertainment proposition not yet available in the region.”

The company’s Board of Directors has approved the implementation of a US$500m stock repurchase program, complementing its ordinary dividend policy announced earlier this year. “We believe this capital management strategy provides us with the mechanism to return surplus capital opportunistically and efficiently, while maintaining flexibility to fund our current operations and future development pipeline,” Mr. Ho explained. “We believe that Macau remains the most exciting gaming destination in the world. The city’s location directly adjacent to Mainland China provides Macau with a vast and increasingly consumer-focused feeder market. With ongoing support from local and Mainland Chinese governments, we expect Macau to continue to evolve into the leading gaming and entertainment destination in Asia.”

For the quarter ended June 30, 2014, net revenue at City of Dreams was US$967.5m compared to US$967m in the second quarter of 2013. City of Dreams generated Adjusted EBITDA of US$290.2m in the second quarter of 2014, representing a decrease of three per cent compared to US$300.2m in the comparable period of 2013. The decline in Adjusted EBITDA was primarily a result of lower rolling chip volume and rolling chip win rate, partially offset by growth in mass market table games drop and an improved mass market table games hold percentage.

The number of gaming machines in operation at Mocha Clubs averaged approximately 1,200 in the second quarter of 2014, compared to approximately 2,000 in the comparable period in 2013 due to the closure of four clubs partially offset by the opening of two new clubs in late 2013 and 2014, respectively.
On a fully consolidated basis, Melco incurred approximately US$16.9m of operating expenses in the second quarter of 2014 at City of Dreams Manila, which primarily relate to pre-opening costs.

In terms of the legal issues, The Taipei District Prosecutors’ Office has revealed that the Taipei branch of Melco Crown transferred over$194m in a deliberate violation of Taiwanese foreign exchange controls, between July 2009 and January of 2013. Melco said it hadn’t yet been served with the indictment but would ‘defend vigorously’ any legal action, adding it had always complied with Taiwan laws.