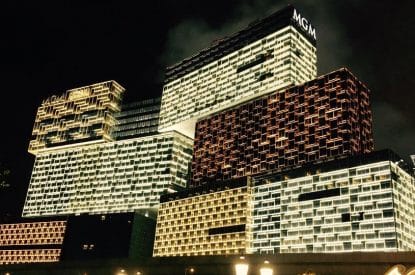 With the Macau gaming market still under the severe impact of COVID-19 pandemic in the third quarter of the year, MGM China continued to experience low visitation levels primarily driven by various travel restrictions and quarantine measures for the three months and nine months ended September 30, 2020.

During the third quarter of the year, MGM China recorded total revenue of approximately HK$363 million, up by 41 per cent sequentially from the second quarter.

The company said: “There has been limited market activities during the quarter. Macau visitation was down 92 per cent from last year. Gross gaming revenue was down by 93 per cent year-on-year as well. With the pandemic situation stabilizing in the region, Macau has lifted the 14-day quarantine measures between Macau and Mainland China in July, followed by a resumption of issuance of tourism visas starting from late August. While logistical hurdles and nucleic acid testing requirements continued to impact visitation levels, the market has been steadily improving indicating a gradual recovery pace.”

Market-wide daily visitation has been very steadily improving into October Golden Week. Since second week of the month, we are seeing improving volume across all segments sequentially week on week. The Group maintained a healthy financial position. As of September 30, 2020, the Group had total liquidity of approximately HK$10.9 billion, comprised of cash and cash equivalent and undrawn revolver.

Hubert Wang, President & Chief Operating Officer of MGM China said: “We are encouraged to see the reopening of Macau and a recovery in the market. We expect the rate of recovery will continue to be gradual, driven by the premium mass market – which both MGM MACAU and MGM COTAI are ideally positioned to capture.”

Construction of additional suites at MGM COTAI is underway and expected to be launched in 2021, while there are other remodeling and refurbishment projects on both properties to enhance customers experiences.

“We will continue to invest in strengthening our market position, and continue to believe in the long-term success of Macau,” said Hubert Wang.