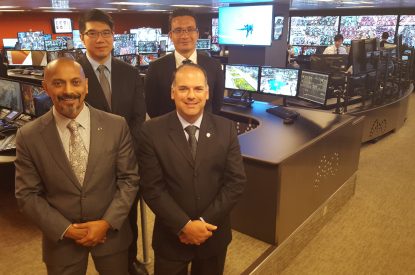 The lid has been lifted on the surveillance levels deployed at Melco Crown’s Studio City with security specialist Dallmeier describing it as the largest full HD casino video system in the world, involving several thousand IP cameras.

The entire video security system is based on IP technology and delivers outstanding full HD image quality throughout. Besides other casinos in the Melco Crown Entertainment Group; City of Dreams Macau, City of Dreams Manila and Altira Macau, Studio City now joins the long list of Dallmeier’s customers.

Leroy Daniel, Executive Director MCE Surveillance Operations, said: “The video surveillance system supplied by Dallmeier is the world’s first 100 per cent end-to-end IP full HD system of this size, scale and complexity within the casino industry. Dallmeier was the partner of our choice for numerous reasons, first and foremost the casino industry is by nature the most demanding surveillance system application in the world today. From airports, prisons, shopping centres, universities, military facilities, city surveillance, etc., nowhere has the concentration of cameras per square metre than what you will find in a casino property as well as the real-time demands by individual users. Very few systems can seamlessly meet such high level of demand in all aspects, let alone also as a full IP system.”
The outstanding image quality of the Dallmeier cameras also influenced the operator’s decision.

Mr. Daniel added: “The full HD PTZ and fixed cameras perform with an extraordinary resolution and excellent zoom functionality. In casino surveillance, definition of details is absolutely critical and can make the difference in a case or incident. Another reason was the ability to adjust camera settings via global configuration down-the-line, which means less time on ladders and less disruption to our business.”

Mr. Daniel explained that the biggest challenge was the design complexity of the property, both in terms of the master plan but also ceiling design and fixtures. “The challenges come when other ceiling infrastructure such as lighting elements, fire systems, ventilation, design features, public announcement and sound system all end up in the same place where you need to place cameras. Designers tend to focus priority on Form over Function, whereas operations people lean towards Function over Form. There is, however, a balance of function and form that can be achieved via close collaboration with architects and designers whereby the Dallmeier IP cameras (running off CAT-6 cabling and low heat emitting) can be aesthetically integrated into or within ceiling design fixtures or chandeliers…this we have achieved quite successfully.”

Dallmeier also developed a special camera for Studio City, known as Pit-View, a small HD 1080P camera which has been successfully integrated into all Studio City’s gaming table scoreboards, bringing surveillance cameras out of the ceiling and down to patron level providing superior views of the gaming action.

The Studio City Surveillance Operations Centre is designed with functionality and ergonomics in mind, with the understanding that the best results are achieved through the eyes of our surveillance operators.

Mr. Daniel explained: “So providing them a work space that can deliver a high-performance results-orientated environment with the highest level of HCI (Human Computer Interaction) and intuitiveness was a key focus. The operator intuitiveness and user-friendliness of the video management, the Dallmeier SeMSy system, also goes in line with this philosophy.”

At the Surveillance Operations Centre, the on-shift management team are embedded in the heart of the operation with direct line of sight or peripheral on all monitoring stations. The managing support levels can flow and circulate around and behind consoles with ease, providing the necessary guidance, coaching and performance management.

Mr. Daniel also explained that some of the key integrations that make Dallmeier unique is the customised development of high-level interfacing to core systems around the property. Interfaces include gaming machines, intelligent gaming shoe, point-of-sale, security access control intruder detection system and RFID gaming chips.
“This brings the convergence of video and data or events directly to our operators in real-time and book marked for click-&-play or available for post investigation, analysis, or export looking into trends and anomalies,” he explained. “Additionally, direct interfaces to the security system allow immediate on-screen-display of cameras associated or nearby any alarmed event, enabling the effective timely detection, assessment and dispatch of response teams with situational awareness.”