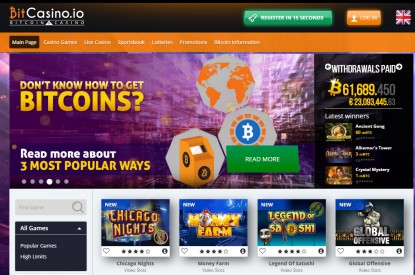 Its largest single win was 274 Bitcoins (€100k+) on a single spin whilst it has paid out €14m worth of progressive jackpots. It has attracted players from over 140 countries around the world.

Launched in August 2015, the Bitcasino.io Sportsbook has over 60,000 events monthly. It has an average pay-out speed of 2.5 minutes for player withdrawals during 2015, which is believed to be one of the fastest in the industry.

Mark McGuinness, the company spokesperson for Bitcasino.io said, “Since opening our Bitcoin casino in January 2014, we have witnessed tremendous growth becoming the market leading destination for Bitcoin gaming both on desktop and mobile.”

“2015 was an important year for industry awareness and player acceptance of Bitcoin as a ‘seamless gambling chip’ helped bitcasino.io become the premier destination for discrete bitcoin gambling. Many industry observers have referred to bitcoin as a niche product and a fad. This is far from the reality; bitcoin gambling continues to gain mainstream acceptance amongst players, particularly the millennial demographic and it will continue its growth trajectory into 2016 and beyond,” he added.

“We are also very excited to be launching Sportsbet.io in June 2016 for the UEFA championships in France. Given the success we have had with bitcasino.io, we are confident that it will become the premier sports betting destination for all Bitcoin players across all devices.”