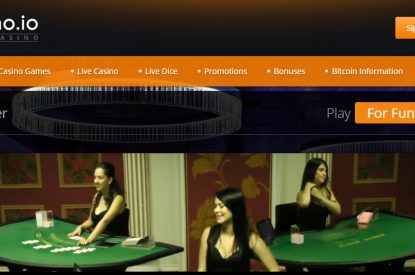 BitCasino.io has announced a new bitcoin blackjack table, the first of its kind in bitcoin gaming.
Players can bet from 1mBTC (roughly 40¢) up to 600mBTC ($230), playing up to five hands at any time.

The software is built with state of the art technology allowing for a seamless casino experience, one that would typically be associated with the big players in the traditional gaming industry.

The game also comes with a number of options, allowing the player to customise their experience with faster/slower game speed, alternate card styles and sound options. Also introduced is an all new ‘autoplay’ feature; this allows the player to select their chosen strategy and leave the cards to play themselves, promising to provide additional comfort for the user.

This new bitcoin blackjack game builds on BitCasino.io’s successful first nine months of operation, acquiring over 50,000 players and paying out thousands of bitcoin, including a recent 65BTC ($25,000) Jackpot win in October. The casino has also undergone a full redesign, providing an improved user experience and allowing players to get in on the action through their mobile.

A spokesperson said: “We have experienced extraordinary growth, both in terms of new player registrations and overall turnover, and the feedback on our games has been excellent. That’s why we’re reinvesting as much as we can into new games like Bitcoin Blackjack – we are now bringing a mainstream experience to this new and exciting cryptocurrency market. The rapid adoption of Bitcoin worldwide and the simplicity of processing deposits and withdrawals, has seen a huge influx of players from countries we would have never imagined.”