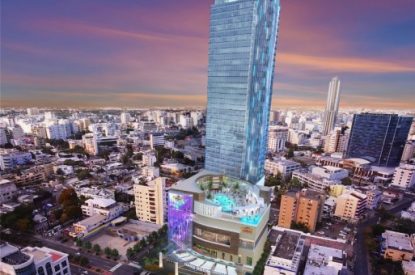 Hard Rock International has announced its decision to pull out of the building of a large scale casino in capital Santo Domingo.

The announcement comes after growing opposition amongst locals belonging to the neighbourhood of Piantini and surrounding areas who had vowed to oppose the building of the casino in a residential sector with thousands of inhabitants. Locals argued that the casino would cause a negative impact on the local community and that the project violates local planning provisions as well. The news comes despite the fact that a court ruled in its favour last month.

The news was made public by the Mayor of the National District, David Collado, after explaining that the executives lost interest in the project. Mr Collado said that the City Council had maintained a strong position throughout the hearings. However, he pointed out that building permission was granted by the previous administration and local neighbourhood committees had an important role to play.
On February 15 the President of the Supreme Administrative Court of the Dominican Republic rejected the request for protective measures, filed against provisional permits for the construction of the Hard Rock Casino & Hotel.

But in a strongly worded statement lawyer Miriam Paulino, who has been representing the local community in their opposition to the new casino, said: “We are going to study the sentence but we are announcing that from now on that we will resort to the corresponding appeals route and we will carry out all the actions and legal means possible under the law in order to achieve the stoppage of this work and to achieve the cancellation of the permits which up until now have been granted in an irregular manner. We have lost one of a thousand battles. We will not give up.”

In January 2016 Hard Rock International, revealed plans for its second hotel and casino in the Dominican Republic, Hard Rock Hotel & Casino Santo Domingo, located in the heart of the capital city. A full service hotel was scheduled to open at the end of this year, and would have featured 400 hotel rooms and would be home to a 23,000 sq. ft. casino, screening room, and a nightclub opening up to the main pool. There were 400 slot machines and 40 table games planned for the space alongside a private gaming room.

However, opposition to the new project had been growing since February 2016 when a committee of school staff and residents in the neighbourhood of Piantini asked the Ministry of Finance to deny a licence for the casino. The following month a total of 3,000 families joined forces to oppose the new plans with concerned locals making the request via an open letter to the Minister of Finance. In July a number of neighbourhood councils reiterated their rejection due to the negative impact that the largest casino in the city would have on what is a primarily a residential zone. Residents of the neighbourhood of Piantini and surrounding areas then filed against the urban planning department of the National District arguing that the project violated local planning provisions.