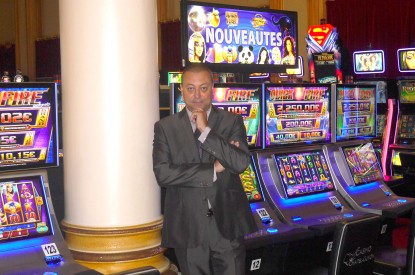 Part of a programme of renovation, commencing with an overhaul of slot games at its spa resort casino in central France, the installation of new Aristocrat games was completed by Aristocrat’s exclusive French distributor, SFC2A.

SFC2A managing director, Jorge Lopes, said, “The injection of fantastic new games at Châtel-Guyon is hosted on a mixture of Helix Upright and Super Screen Slant cabinets and comprises a broad range of themes from the entertainment-based E*Series and jackpot-driven J-Series, as well as a number of Aristocrat’s inspirational new range of C-Series core games.”

SFC managing director, Carlos Ubach underlined his confidence in Aristocrat, explaining that players had shown great affinity for Aristocrat games, most notably Wonder 4, Sky Rider and Temple of the Tiger on Viridian widescreen: “With a broad choice of new games on offer and by taking the initiative now to introduce two elegant new cabinet styles to the floor, we are providing our customers with an exciting new variety of spectacular gaming entertainment. The immediate response has been hugely encouraging, with a significant increase in visitation and player interest across the new banks since the launch.”

“The centre of Châtel-Guyon is currently undergoing a phase of redevelopment, with the casino itself, adjoining theatre, neighbouring hotels and outside leisure amenities all receiving makeovers ahead of a tourist destination re-launch scheduled for the end of this year,” he added. “We will be following this game installation model very closely, with a view to further implementations at our three other casinos, located in Gruissan, Port la Nouvelle and Collioure.”