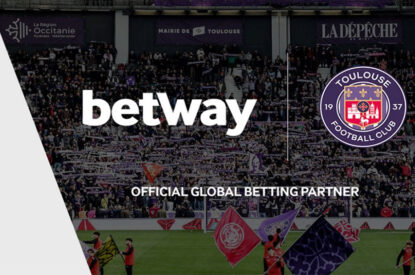 Betway has announced a multi-year deal with French Ligue 2 side, Toulouse FC, that will see the Super Group owned operator’s branding appear around the Stadium de Toulouse on LED boards and panels.

During the initial deal, Betway will also have a presence on the players kit until at least the end of the 2024 football season, as well as deliver exclusive social media and digital content throughout the partnership.

Anthony Werkman, CEO of Betway, explained: “Having built one of the most exciting and enviable global sport sponsorship portfolios of any industry, we’re very proud to be announcing our first partnership in France, as we’ve signed a multi-year agreement with Toulouse FC.

“The club has a great history and have ambitions to get back into Ligue 1 and we look forward to supporting them on their journey.”

Brice Maurin, Head of Marketing at Betway in France, said: “It’s with great privilege that we can announce our first sponsorship in France, after working to establish the Betway brand in the country for the past 12 months.

“Joining our fantastic global portfolio of sponsorships is a superb Toulouse side that have fantastic ambitions to get back into Ligue 1 and to re-establish themselves in France’s top tier football division.”