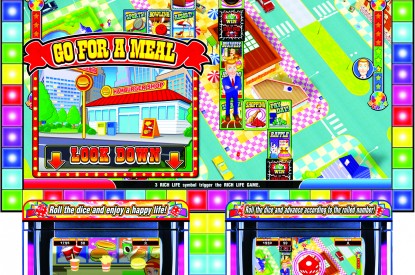 Aruze Gaming will be taking the competitive edge of community gaming to the next level at G2e Las Vegas with Rich Life, which places two players side-by-side in a head-to-head competition called the Versus Event.

The Versus Event is displayed on a 60-inch LCD monitor that features a large game board showing the progress of the player as they move through the game. Players are able to select their own character, and during a randomly triggered Versus Event, the decisions that one player makes can has an effect on the outcome of the other player.  If the player makes it all the way to the Goal in the individual game, they are awarded a chance to win a variety of credit awards through the spin of a wheel.

Elsewhere in the community gaming segment of Aruze’s product portfolio is the award winning G-Link title Amazon Fishing. Amazon Fishing includes Aruze Gaming’s Reel Feel Gaming Technology, as well as a Choose Your Bait option that allows players to attract the types of fish they want according to their own play style. Bigger bait means bigger fish and higher volatility, while the smaller bait will appeal to the player who is looking for less volatile pay-outs.

Aruze will also introduce a new product category called the Innovator Deluxe with Aladdin & the Lamp proving both the innovation and the deluxe aspects of this slot series.

Following the success of its Innovator steppers with Radiant Reels, these machines feature top boxes aiming to attract all eyes towards the game, which is a premium range of stepper that matches the excitement of Aruze steppers, with unique interactive experience.

Players rub an actual lamp to call forth the genie during the bonus event. Actions that occur in the top box impact the spins of the Radiant Reels below.

In the standalone video G-Series segment, Aruze will be showing its largest portfolio of new games in its history with over 20 new video titles on display for the first time in Las Vegas. This includes the Standalone Progressive, Rich and Prosperous, which features an exciting rapid hit symbol driven progressive that can be won in both the base game and the feature games.  As the player increases their bet, more progressive trigger symbols are added to the fifth.  Among the additional G-Series games on display will be Lucky Africa, Bengal Riches, Eagle Warrior and Queen Bee.

Aruze Gaming will also show its latest premium range of G-Deluxe interactive top box products, including Franken Mama, Shen Long Fever and Knight of LaMancha, each featuring an exciting base game with many frequent interactive bonus events inside and oversized top box.