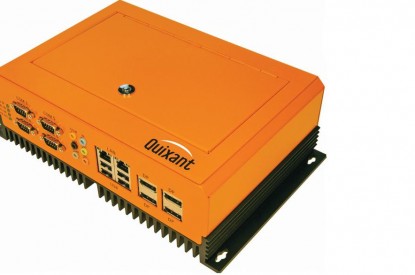 Quixant USA will be using G2e Las Vegas to launch its latest all-in-one gaming platform, the QXi-4000, as well as publicly exhibiting its high-end QX‑40 platform for the first time at a major international gaming exhibition.

The QXi-4000 is a compact, fan-less all-in-one gaming platform based on AMD’s Embedded R-Series APU with integrated AMD RadeonTM HD7000G series graphics and is capable of driving up to four independent HD screens, including support for DisplayPort 1.2 technology. It is available with both Dual and Quad Core processor variants up to 2.1GHz (to 2.8GHz with boost) and supports up to 16GB of DDR3 main memory. The new QXi-4000 offers unrivalled performance at a very attractive price point.

Launched in May the powerful QX-40 combines the power of AMD’s Embedded R‑Series APU together with a discrete AMD RadeonTM E6740 or E6760 Embedded GPU on the same PCB. This unique integrated package can support up to ten independent HD screens. The QX-40 features an enclosed CPU tray and backplane arrangement, allowing simple customisation to match all cabinet and wiring requirements. Dual and Quad Core configuration options are available up to 2.7GHZ (to 3.2GHz with boost) with up to 16GB of DDR3 RAM.

Both the QXi-4000 and QX-40 feature Quixant’s advanced PCI Express based gaming I/O and non-volatile MRAM/SRAM which boasts a significant increase in functionality and bandwidth.

The QXi-4000 and QX-40 benefit from Quixant’s comprehensive driver and protocol support, including SAS 6.02, under both Windows Embedded and Linux. Long term supply is ensured for a minimum five years at the launch of each new product.