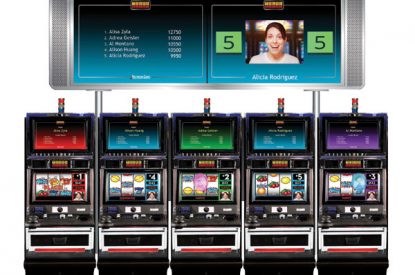 Multimedia Games will demonstrate an expanded reach for its award-winning TournEvent slot tournament system, new content and game mechanics that add to its portfolio of games at G2e.

Patrick Ramsey, President and Chief Executive Officer of Multimedia Games, said: “Multimedia Games is taking our TournEvent of Champions, which has been a huge success already in several states, nationwide in a year-long event that will culminate at G2e 2013. We will also extend the excitement of our High Rise Games series with two great new games and will showcase our re-designed Player HD cabinet featuring new lighting effects. Finally, we are excited to bring a slice of Austin fun to the show with daily live performances by Austin-based band Micky and the Motorcars.”

TournEvent will once again capture centre stage at G2e. Offering industry-leading functionality that has revolutionised the slot tournament experience, TournEvent 4.0 enables a dynamic and interactive tournament at the touch of a button and enables operators to create unique team slot tournaments for the first time, offering a variety of customizable configurations based on the number of players, mechanics of team advancement, rankings and tournament prize awards.

Mr. Ramsey added: “The incredible buzz generated by TournEvent of Champions in both California and Washington State as well as the overwhelming demand for our TournEvent slot tournament system made it clear that we needed to offer our customers an unparalleled slot tournament experience on a national level. Our team has created a fantastic turnkey solution that leverages the power of TournEvent to generate instant floor-wide buzz and help improve floor performance at our customers’ facilities.”

Elsewhere Multimedia Games continues the success of its development efforts with a variety of new games that address all gaming markets.

Wild a Go-Go is the sequel to Multimedia Games’ most popular title, Carnival in Rio, Wild a Go-Go takes players back to the 1960’s every time they enter a bonus round. This 4×5, 5-reel video game features psychedelic graphics, energetic music and live-action dancers as themed, animated stacked symbols.

Flash Point is a departure from 70’s style casino games, offering a gritty, bubbling-hot fire theme that stands apart from the crowd with edgy audio and video elements. The Flash Point Bonus offers guaranteed big wins of at least 10x the total bet with every free spin bonus trigger.

Good Luck Charm is the first fully-customisable game from Multimedia Games. This 5-reel, 50-line video theme allows players to choose from one of four lucky charms (shamrock, star, horseshoe and rabbit’s foot) which then determine the theme of the game screen and the wild symbol during game play.

Building on the successful recent launch of its first premium participation products, Multimedia Games is also expanding its High Rise Games portfolio with two new titles that will further leverage the uniquely designed gaming cabinet – which features a vertically oriented 37” LCD top-screen – to again deliver a visually thrilling player experience. Since its initial commercial launch in March 2012, the installed base of High Rise Games has grown to 97 units placed in eight markets as of June 30, 2012, with strong performance in all markets to date.

Mr. Ramsey commented: “Our High Rise Games cabinet and five initial game titles continue to generate solid results on customers’ slot floors and we are excited to demonstrate new premium participation game titles this year. We’ve successfully entered this growing segment of the slot floor and believe that the exciting base game play and innovative bonus rounds of High Rollin’ and Wild Rainforest with MoneyBall offer compelling and distinct gaming experiences that will appeal to slot players. The new games for the High Rise Games series complement our existing product portfolio and further our ability to address a wider range of customer needs