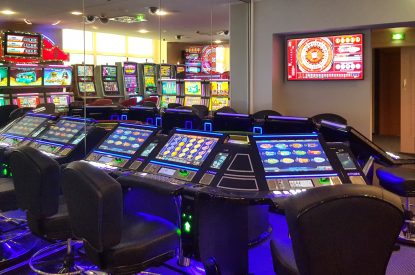 Euro Games Technology has launched its STORK terminal into the German casino market with a presentation in Cottbus, held along with D-Systems, EGT’s distributor in the market.

The event took place in Joker’s Place Casino, a venue where EGT has achieved notable success with its multiplayer range. The casino had its first installation several months ago when two identical configurations of 6 STORKs with an automated roulette wheel were launched. Casino managers from all over Germany attended the event to see presentations from Emilia Tomachinska, Managing Director of D-Systems GmbH, and Thorsten Schürkötter, General Manager of Joker’s Place Casino.

Among the participants were Anja Bohms, CEO of Land Brandenburg Lotto GmbH, and Ingo Edelmann, business director of BSB KG.
Guests were able to try the STORK terminals already installed by Joker’s Place Casino, set up in the smoking and non-smoking areas of the casino. The games include a multigame mix of Premier Rigel-1, featuring 20 video slot titles, which can be connected up to six automated or live roulette wheels as well as being linked to a 4-level mystery progressive jackpot system Jackpot Cards.

EGT also demonstrated Exciter III, also making its official debut in Germany, and showing the multigame mixes of Orange and Green, each with 48 different titles in its library and housed in the P-24/24 Up.

Emilia Tomachinska said: “We are pleased by the positive feedback we received from our guests. They were impressed with how versatile the STORK terminal is with its different configurations. I am confident that the presentation will build towards many STORK installations around the country, along with other EGT products.”