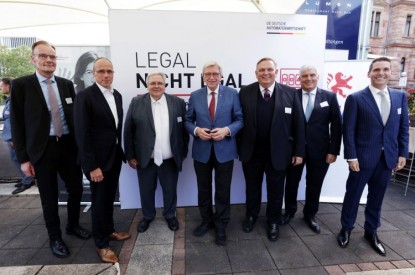 Numerous guests from politics and the vending machine industry accepted the invitation of the Hessian Coin Machine Association (HMV) and the umbrella organisation Die Deutsche Automatenwirtschaft eV (DAW) to Wiesbaden on July 7.

At the parliamentary summer evening in the state capital, they were welcomed by DAW board spokesman Georg Stecker and Michael Wollenhaupt, 1st chairman of the HMV . Guests of honour this year were the Hessian Prime Minister Volker Bouffier, the Hessian Interior Minister Peter Beuth, the parliamentary leaders of the CDU, Ines Claus, the SPD, Nancy Faeser, and the FDP, René Rock as well as the managing director of the leading company of the German Lotto and Totoblocks, Jürgen Häfner.

Prime Minister Volker Bouffier emphasised that it is always a matter of concern for Hessen to guarantee a high level of protection for players and young people without prohibiting people from gambling and depriving companies of their livelihoods. With regard to the State Treaty on Gambling, the Prime Minister said there was a lot to be said for Hessen to implement the existing regulatory options for the protection of players and minors.

In his speech, DAW board spokesman Georg Stecker praised the possibilities of regulation according to qualitative standards in the area of ​​player and youth protection contained in the State Treaty on Gambling.

“Because it depends on the quality of a gambling hall and not on its size or the distance, the State Treaty on Gambling gives the states the opportunity to obtain existing multiple licenses and to deviate from the applicable minimum distances if special qualitative requirements are met. This includes the special training of the staff, a certificate of competence by the operator and also the arcade certification, for which we as a machine industry have been campaigning for years. Hessen should also make use of the possibility of obtaining existing multiple concessions, because a sufficient and attractive legal offer is required for successful channeling,” said Mr. Stecker.

“The corona-related amusement arcade closings have hit the slot machine industry hard,” said the chairman of the Hessian Coin Machine Association, Michael Wollenhaupt. “Whether in amusement arcades or in restaurants; many of the almost 6,000 employees in our branch in Hesse were on short-time work. The companies are still struggling with the consequences of the lockdown. Good regulation does not rule legal providers, but – on the contrary – it strengthens them. Because only with a sufficiently attractive offer can the industry fulfill its channeling mandate from the State Treaty on Gambling and provide effective protection for players and minors. And the black market can only be effectively combated with an attractive legal offer.”