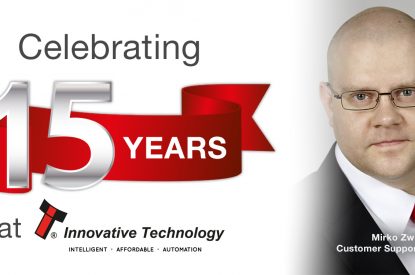 Innovative Technology have announced that one of their long-standing technical support personnel is celebrating 15 years’ service with the company this month. Mirko Zwing is based in ITL’s German office in Pinneberg and has been given a series of promotions over the years.

Commenting on this long-standing achievement Mirko said: “I first joined ITL in 2006 as a Repairs Technician, just as the original NV10 was released. Soon after I started at ITL, the company began to release many new products and I was responsible for providing customer training for the BV range of validators. I gradually moved from my repairs role to being appointed the first, dedicated Customer Support Engineer in Germany in 2009. The German support team later merged with UK Support where I enjoyed being part of a bigger team and soon took the role of Lead Customer Support Engineer. Then in March 2020 I was delighted to be given the opportunity to take on more of a management role as Customer Support Manager, heading up the UK & Europe Technical Support teams for gaming customers plus responsible for support in Spain, South America, Asia & Oceania for both gaming and retail clients.”

Speaking about Mirko’s commitment to ITL, VP for Customer Support Andy Bassam said “Mirko is a valued member of the support team who has had a number of successful promotions at ITL over the years. His product knowledge, technical skills and management abilities are exceptional, and he is a vital member of my team. He has been crucial in providing technical support and training to customers for our new Spectral products, ensuring they have access to the support they need to make sure they get the best from these latest technologies in order to add value to their businesses.”

Commenting on Mirko’s achievement, Marcus Tiedt, Sales & Marketing Director for ITL, also based at ITL Germany said: “I am proud to say that I have worked with Mirko throughout his career with us and he is a key part of the ITL family here at the German office. I would like to take this opportunity to congratulate Mirko on his impressive time at ITL, his commitment to the company and the excellent job he is doing managing a large team of first-line technical support advisors and technical engineers to ensure first class customer support is given to each of our customers.”