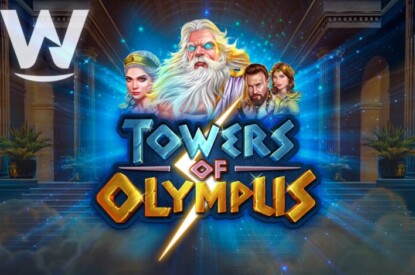 NeoGames subsidiary Wizard Games is inviting players to brush shoulders with the gods in its new release Towers of Olympus.

Telling the tale of Zeus, the Greek deity of the sky, this 5×4 slot contains a plethora of features as players meet up with legendary idols on their thrilling journey.

Towers of Olympus also features an exciting Free Spins mode. When three, four or five Scatter symbols land, eight, 12 and 15 spins are awarded respectively, with a guaranteed Blue Mystery Tower appearing on every spin. In addition, Super Spins can be triggered during this game mode, presenting the opportunity for some divine rewards.

Players can also increase the chance of initiating Free Spins with the Boost feature, where the original bet is increased by 50 per cent and more Scatter symbols are added to the reels.

In certain regions, players can progress straight to the Free Spins with the Buy Bonus option. Towers of Olympus is a medium to high volatility game, with three different levels of RTP – 88%, 94% and 96%. It is the newest addition to Wizard Games’ growing portfolio, following Bier Haus Riches, Alice Mega Riches and Amun Ra – King of the Gods in its ever-expanding games offering.

Joey Hurtado, Managing Director at Wizard Games, said: “We have seen with many of our recent hit releases that players around the world love games that are packed with features, and Towers of Olympus offers a wide variety of ways to win.

“It’s also a game that is attractively presented and with the Boost option, it provides additional chances for players to hit the Free Spins feature. We look forward to seeing how the important release is received.”