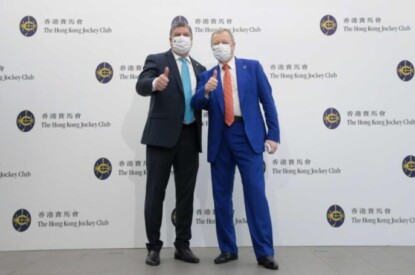 The Hong Kong Jockey Club closed out the season’s 88th and final meeting of the 2021/22 season on Saturday, having hosted a total of 836 races and simulcast 281 overseas races, and posted another record turnover of HK$140bn, for a three per cent increase compared to that of 2020/21 season. The betting duty reached a total of HK$14.1bn, representing a 2.8 per cent increase from last season. The total turnover of the season finale meeting reached HK$2.039bn.

“I am extremely proud of the efforts of all involved that, with the trust of the Hong Kong Special Administrative Region Government in giving us permission to continue racing, we have again been able to complete a full season of world-class horse racing while at all times upholding the principle of protecting the health and safety of the public, our employees and stakeholders. As a Club, we are again grateful and encouraged by the outstanding turnover which ultimately allows us to contribute more for the betterment of our society,” said Mr Winfried Engelbrecht-Bresges, the Club’s Chief Executive Officer.

“We are gratified once more by the collective discipline and togetherness of all participants – trainers, jockeys, owners, employees and customers – which has allowed us to continue showcasing Hong Kong’s most popular sport to the world.

“As always, Hong Kong’s ‘can-do’ spirit is at the core of our operation and I am thankful for the sacrifices made by all involved to keeping racing going. Through the collective efforts of our participants and Club staff, combined with our dedicated COVID testing capacity as well as a vigorous tracking and tracing system, we were able to provide exciting stay-at-home entertainment for hundreds of thousands of racing fans at a time when social distancing was integral to the health and welfare of our city.

“I also wish to again place on record my appreciation to our members and customers for their understanding that as a result of our alignment with the Government’s public health policy, the Club was restricted in the number of people we could host at our race tracks. There were also significant restrictions relating to access to our Off-Course Betting Branches.

“It remains our abiding ambition that, as soon as possible, we are able to return to normality and we can welcome back all of our customers to Sha Tin and Happy Valley.”

Hong Kong racing once again delivered 10 and a half months of extraordinary entertainment, underpinned by brilliant individual equine and human achievements.

With the implementation of a racing bubble under the closed-looped operations at the two racecourses, the Club was able to stage international competition with the LONGINES International Jockeys’ Championship (IJC) and the LONGINES Hong Kong International Races (HKIR). However, the deteriorating COVID-19 situation in April unfortunately prevented any participation from international horses, trainers and jockeys for FWD Champions Day.

In the absence of international participation on FWD Champions Day in April, Golden Sixty, Romantic Warrior and Wellington filled the void with wonderful G1 victories.

Frankie Lor claimed his first champion trainer title, with 90 wins, after a rollercoaster tussle with his former mentor John Size. An 11-time champion, Size refused to yield before ending the campaign with 84 wins, marking the eighth time he had finished either second or third in the championship during his phenomenal Hong Kong career.

In a season of milestones, Size and Tony Cruz joined John Moore as the only trainers to saddle more than 1,400 winners in the jurisdiction, while Lor created history of his own.

One of the most compelling – and uplifting – battles this season was waged for the Tony Cruz Award for the most successful home-grown jockey. After several seasons of struggling with injury, Matthew Chadwick (55 wins) reprised his very best form to end Vincent Ho’s (50) three-season reign. Derek Leung (48) posted his best season so far to finish third.

The CEO said: “Matthew’s effort to ride more than 50 winners in a season for the second time in his Hong Kong career marked his return to the top flight as a rider. Matthew, Vincent and Derek are also graduates of the Hong Kong Jockey Club’s Apprentice Jockeys’ School and the trio’s effort to combine for more than 153 winners against some of the best riders in the world speaks volumes for their skill.”

For the ninth consecutive season, Joao Moreira and Zac Purton duelled throughout an eventful campaign, trading the lead on six occasions, before Purton prevailed with 136 wins to the Brazilian’s132. Purton, who won the LONGINES International Jockeys’ Championship for a record-equalling third time, matching the feats of Douglas Whyte and Frankie Dettori, has now won the jockeys’ championship on five occasions – one more than Moreira, who snared the G1 LONGINES Hong Kong Vase on Glory Vase.

“Zac has shown tremendous resilience and world-class ability throughout another wonderful season,” Mr Engelbrecht-Bresges said. “He and Joao shared another engrossing contest and the fittingly result was in doubt until the season finale and it took all of Zac’s skills to win for the fifth time. We look forward to a resumption of the battle next season.”

Addressing the importance of international racing to Hong Kong, Mr. Engelbrecht-Bresges said: “We remain strongly committed to stage world class racing here in Hong Kong and the LONGINES Hong Kong International Races again attracted some of the best horses and horsemen in the world, and produced another great day of Hong Kong racing history.

“The Club is determined to maintain those world class standards and to do that prize money is a key element. As such, we have made significant prize money increases for the 2022 LONGINES Hong Kong International Races next December, when we will offer HK$110 million across the four G1 contests. We want to encourage continued investment in the sport, while also increasing return on investment, as well as attracting the best horses and horsemen from around the world to compete in our races, especially the LONGINES Hong Kong International Races and FWD Champions Day. This is all necessary to keep Hong Kong in the front rank of world racing and provide the best quality for our fans and customers.”

One of the outstanding features of 2021/22 was the number of winners to emerge from Conghua Racecourse (CRC). The Club’s Conghua facility in Guangdong Province opened in August 2018 and continues to provide tremendous benefit to Hong Kong racing with a record 32 of champion trainer Frankie Lor’s wins coming from horses that went to the races off a stay at Conghua since their previous start.

Mr Engelbrecht-Bresges said: “The vision of Conghua continues to yield positive results and we are delighted with the success we are seeing. We will be entering the next important phases of the Conghua Racecourse development, including construction of a grandstand, stabling capacity for an extra 400 horses, and additional state-of-the-art training and rehabilitation facilities. The importance of CRC will grow further with the significant work we will undertake in the holistic stable refurbishment in Sha Tin, ensuring the continuous upgrade of our assets to meet the future needs of trainers, and even more with the introduction of regular race meetings rostered in CRC in 2025/26, when we will establish a triangle of racing across our three racecourses at Sha Tin, Happy Valley and Conghua.”

While the Club is continuing to attract world-class talent from overseas and promote high-potential home-grown talents. It will be important to also retain a number of high-performing and elite trainers who make a significant contribution to successfully training higher-quality horses, which are key to the Club’s strategic objective of world-class racing, and provide this level of services to owners whose investments are key to the quality of our racing. Therefore, the Club has revised the trainers licensing criteria beyond retirement age, so that those trainers who have a proven capacity to successfully operate dual-site training operations could continue to train beyond the age of 65, which is especially important as we enter this next phase of development, including the significant complexity that the Sha Tin refurbishment will create.

The Club’s announcement of the record prize money increase to HK$1.62 billion across the 2022/23 season in April is another clear statement that it is looking beyond the current challenges challenges created by the pandemic and reaffirming its long-term strategy of providing the right incentives structure to reward owners who invest in the high-quality horses that are the foundation of Hong Kong’s world-class racing.

“We are looking forward to seeing a lot of exciting milestones from now until the 2030,” Mr Engelbrecht-Bresges added.

It is a remarkable achievement that the turnover for this season has reached HK$140bn. In particular, the trend of local race turnover remains strong at HK$129.9bn, representing an increase of 0.5 per cent over the last season.

These figures underscore the important strategy of showcasing Hong Kong racing globally and to harvest our investment to build our world-class racing product via commingling into Hong Kong, which is 18 percent of our turnover. This helped to grow the overall turnover and compensate for the reduction in local turnover, especially due to the closure of our Off Course Betting Branches for 12 weeks.

Domestically, Hong Kong racing showed immense quality and appeal with our customers continually showing tremendous support for our product, which is built around quality horses and outstanding trainers and jockeys.

The World Pool simulcast, which was created by the Club and launched at Royal Ascot in 2019, continues to show excellent growth. Royal Ascot in 2022 was an outstanding success with combined turnover on the meeting rising 13 per cent from 2021 to HK$1764.5 million.

Reflecting the popularity of World Pool and the Royal meeting, records were set almost on a daily basis and saw the Commonwealth Cup Day meeting generate a record HK$383.6m.

In the 2021/22 season, there was an expanded 21 days of World Pool with our partners in the UK, Ireland, South Africa and UAE, including Goodwood, York, Leopardstown and Kenilworth racecourses offering World Pool for the first time. Total turnover on World Pool meetings was up HK$2777m or 82 per cent, while the commingled component was up HK$404 million or 60 per cent.

Mr Engelbrecht-Bresges said: “Given the circumstances confronting the Club, our overall season racing turnover of HK$140 billion represents a wonderful achievement. The growth in turnover is testament to the quality of our product and the support of our customers.

“To achieve these types of figures underpins the importance of horse racing to Hong Kong and its people. We are also delighted with the continued growth in popularity of our simulcasts with Hong Kong customers.”

Another highlight of the season was the 25th Anniversary Hong Kong Reunification Raceday, which is a symbol of the development of Hong Kong racing in the last 25 years. Over the last quarter of a century, Hong Kong racing has blossomed into a world horse racing leader with the emergence of champion horses who have topped – individually or jointly – the LONGINES World’s Best Racehorse Rankings including Able Friend, Beauty Generation and Golden Sixty as well as fantastic performers such as Silent Witness, Sacred Kingdom and Good Ba Ba, among many others.

Their collective achievements are testament to the formidable skills of our high-quality trainers, jockeys and stable staff, who have helped develop Hong Kong horse racing into one of the most respected and successful jurisdictions on the international stage.

Referring to the Club’s racing betting duty HK$14.1bn throughout the 2021/22 season, Mr Engelbrecht-Bresges said: “The Club is proud to live up to the commitment of betterment of Hong Kong society through racing betting duty and charitable contributions. With this outstanding performance of the season, we are able to do more for our community with a strategic focus that best meets the needs of Hong Kong people.