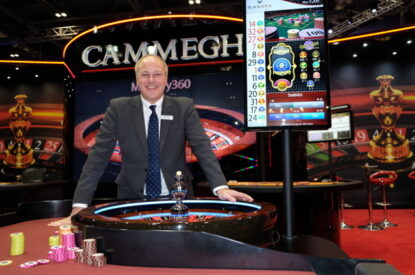 Cammegh launched a large video-wall at ICE 2018, used to display an over-sized Multi-Board for game results from roulette, black jack and baccarat.

“The visual presentation of the Cammegh product range on the stand this year is the best we’ve ever delivered,” stated Andrew Cammegh at ICE. “What makes it extra special are the products and innovation on show this year. The integrated Billboard display system in all its different guises, with customised graphics, side-strips, table minimum illumination and security features etc., has become an essential ingredient in the operation of table gaming. The Billboard integrates with roulette wheels to flag issues, events, error codes etc., and does so in a discrete manner. It adds features such as productivity indicators, whereby the simple-to-use menu system can display the minimum number of games per hour, for example, with the Billboard guiding the dealer and informing the Pit Boss as to the productivity that’s being achieved.”

Cammegh’s new side bets also attracted a huge level of interest at the show. Spread Bet Roulette featured prominently on both the Cammegh and Novomatic booths at ICE. Cammegh has extended its exclusive agreement with Novomatic to feature Spread Bet Roulette on the Novo Unity II EGT system for another two years. In London, Cammegh showcased Spread Bet Black Jack and the brand new Spread Bet Baccarat game, which are also set to be integrated onto the Novo Unity II system in the near future. “Visitors to the booth found each of the Spread Bet concepts really engaging and inviting,” described Mr. Cammegh. “In fact the level of engagement for Spread Bet Baccarat took us a little by surprise. We hadn’t anticipated that we would receive so much interest in this product, though I have to say that the quantity and quality of the visitors to this year’s show was extremely high and we were very pleased with the exhibition overall.”

Having utilised the video-wall to create a ‘grandstand’ display on its booth at ICE, it was Cammegh’s smallest product, the new Mini-Wheel, that became the most feverishly talked about product on the booth. “Aesthetically, who would have thought that moving from a 800mm diameter wheel to a 600mm mini-wheel would create something so visually delicious,” commented Mr. Cammegh. “That said, it’s the productivity gains that this wheel delivers that have proven to be the most exciting for operators.”

Having linked the wheel to Novomatic’s Novo Unity II systems with Aspers in the UK, the mini-wheel is a real number-cruncher in terms of games per hour. Without impacting on player comfort between bets, the standard wheel’s 70 games per hour has increased to 120 games per hour with the Mini-Wheel, almost a 50 per cent increase, which in terms of performance is astonishing. Not only is it a beautiful looking wheel, but the Mini-Wheel is indistinguishable from it’s big brother, the Mercury 360, when broadcast via video, making it the perfect ETG solution. And with all of the Mercury 360 electronics transplanted into the Mini-Wheel, exactly the same functionality is on offer too.

Continuing the theme of new innovations, Cammegh’s Media Pro, a content scheduling application is set to be launched in the second quarter of this year. The product caused quite the buzz at ICE as Cammegh utilised its video wall in combination with its Multi-Board system and Media Pro to deliver promotions to the player on a whole new interactive level. Cammegh is also forging ahead to build on the success of its Spread Bet side bet by creating a progressive solution that will work with the existing Billboard display systems.

In the traditional wheels segment, new materials demonstrated by Cammegh at the show deliver both a more stable platform and allow for the retro-fitting of Cammegh’s patented RRS solution (Random Rotor Speed). RRS is a concept that continues to gather momentum with operators and is a significant differentiating factor that enables operators to protect themselves from fraudulent activity. “We had back-to-back demonstration of the RRS technology throughout the three days in London,” confirmed Mr. Cammegh.

“We are also seeing customers looking to add that bit of electronic glamour to their wheels by including our Halo feature, the illuminated ball-track that chases the ball around the wheel. Overall, we loved presenting our latest products on the new stand, meeting with our friends and customers once again at a terrific event in London and we’re excited about the new business opportunities moving forward into 2018,” he said.