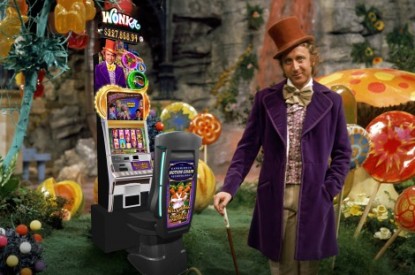 WMS will be showcasing its third WMS Sensory Immersion 2.0 theme, the Willy Wonka and the Chocolate Factory game delivering an entertaining experience with enhanced graphics, play mechanics and advanced touch screen functionality integrated into the game play that is synchronised with the movement of the motion chair.

A ride on the Chocolate River Boat is brought to life through the motion chair technology and gives players the chance to experience the Scrumdidilyumptious joy of finding a golden ticket hidden in a Wonka Bar that awards a $5,000 jackpot – with the odds of finding it increasing each time the jackpot is not won. Even the game’s Wonkavator feature, the free spin trigger used to determine which bonus round will be awarded, is motion enabled.

WMS will be showing over 60 new and unique games at the upcoming ICE 2013 show, powered by our CPU-NXT 2 and CPU-NXT 3 platforms on five dynamic cabinet configurations.

The ICE 2013 line-up will display the deep breadth of new gaming content for the successful CPU-NXT2 operating platform with over 20 themes on display, including new themes for proven-performing For-Sale game series such as the Colossal Reels, G+Deluxe, awesome Reels, Game Chest Multi-Game, Double Money Burst and Amazing Gems.

Showcased at the ICE 2012 show, the Colossal Reels series quickly has become a high-performing product, utilizing the full widescreen capabilities of the Bluebird2 and Bluebird xD cabinets and power of the CPU-NXT2 platform, to feature two reel sets – traditional and oversized – that transfer wild symbols between reels. The series is expanded with six new themes and unique math models at this year’s show.

Targeted for the international markets, the Game Chest Multi-Game series supports multiple languages and currencies, and will be available in three different game sets, all which will be on display at ICE 2013, each comprised of a unique mix of proven WMS gaming content.  The Game Chest Multi-Game series is powered by the CPU-NXT2 platform and is available on the Bluebird2, Bluebird2e and Bluebird xD cabinets.

Featuring the rock music made famous by one of the world’s most recognized and successful bands, the Kiss premium standalone game offers players a unique take on multi-array slot games with original game mechanics. The game features a multi-array base game that can award one, two or three bonus reel sets on any spin, enhanced with either WILD symbols added or low-pay credit symbols removed to enhance the opportunity for a big win

Based upon the immensely popular, long-running TV sitcom show, the Cheers slot game features the lovable cast of characters that everyone knows, including Norm and Cliff. With fun filled bonus rounds like Cliff Clavin’s Random Fact Bonus, where players select a card to be awarded credits and a quick clip of little known information from Cliff, ” or Norm’s “Pour You a Beer Mr. Peterson?” bonus, players are sure to find plenty of enjoyable slot entertainment on casino slot floors.