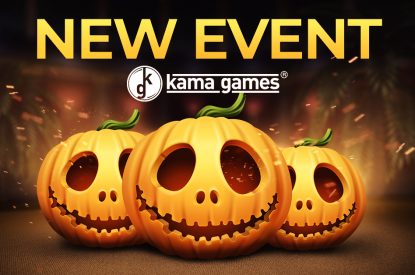 Holiday Events give players the chance to earn event points by playing and winning hands in their favourite KamaGames titles. Once points are collected, players can trade them in for special rewards with more points leading to bigger rewards.

As always, KamaGames aims to enhance the healthy competition shared between players. Therefore, not only will points count towards rewards, they’ll also contribute to a player’s rating among their rivals and friends. This will affect their position in a global rating, country rating and friends rating.

October 29th marked the launch of KamaGames’ most recent Holiday Event, Halloween, which runs over the course of six days. KamaGames’ Halloween event will include a variety of engaging mechanics, bonuses and offers. During the event, the entirety of the Pokerist interface, along with KamaGames’ other titles, will be transformed into a spooky spectacle, complete with themed in-game gifts, special offers, best avatar contests and extra holiday bonuses. The Weekly Tournament during this event will also include a Halloween-themed trophy and players can try their luck with a spin in Wild Monsters – a singular Halloween-styled slot game!

KamaGames CEO Andrey Kuznetsov commented on the launch saying: “This launch works towards KamaGames fulfilling a commitment we made to offer regular and engaging new in-game content to players. The adaptability of this feature means we’re able to constantly change and improve it to suit our needs, offering our players the very best in-game entertainment possible.”

The remainder of 2020 will see KamaGames launch new Holiday Events in-game linked to a variety of global celebrations, festivals and observances.