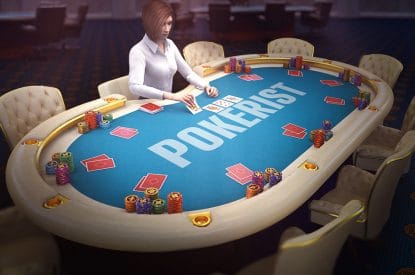 On Friday June 26, KamaGames will celebrate the 10th anniversary of its flagship app, Pokerist. In the 10 years since Pokerist’s beginning, it has soared to the rank of 3rd global social poker app, taking the number one spot in several regions and demonstrating continuous growth year on year.

Attracting more than 140m global users and counting, an integral element in the success of Pokerist is the variety of unique features the app hosts when compared to competitors. In many cases, these now popular features appeared on Pokerist long before they were adopted by other poker apps. The most prominent of these intricate mechanics have been our innovative Party modes which resulted in poker being played by special rules, Multi-Table Tournaments (MTTs) hosting hundreds of online players, Boost Tournaments and Bad Beat Jackpot. Each of these additions offered a creative new way of playing classic poker games for players of all levels and abilities. The introduction of MTTs, marked a significant milestone for Pokerist and the social casino community as a whole as this was the first time this real-world hardcore poker mechanic was successfully incorporated into a mobile poker app.

However, Pokerist has never relied solely on these innovations alone to guarantee success in the social casino market. Throughout the previous 10 years, KamaGames has recognised the importance of socialisation features in gaming. As a result, the company has placed a strong focus on crafting engaging in-game events and providing accessible means of player-to-player interaction. This includes instant messenger features, alongside the ability to chat and send gifts at the tables. This interaction proved a hit among players and contributed to bringing the community of the poker tables to life, giving players an authentic casino experience.

One of the most impressive elements of Pokerist is that it’s not simply one well-crafted poker game. In truth, Pokerist plays host to several high-quality titles such as roulette, blackjack, Omaha poker, craps and slots. KamaGames has built a portfolio of games that allows players to transition easily from one title to another without ever having to leave the app, taking their chip and coin balance, not to mention their friends, with them. Almost all of these Pokerist titles are no. 1 across numerous app stores. This feature of accessibility runs throughout KamaGames portfolio and has stood as an important building block in Pokerist’s success. In 10 years Pokerist has been made available across several popular platforms including the Apple App Store, Google Play and the Amazon App Store and the PlayStation Store. Pokerist was also the first social poker app to launch on Apple TV and Facebook Instant Games.

Andrey Kuznetsov, CEO of KamaGames, said: “We’ve come a long way over the past 10 years and I want to express how thankful I am to the players who have taken that journey alongside us. Over the years we’ve become increasingly receptive to player feedback and introduced new features as a direct result of player needs. This is just one ingredient in the success of Pokerist. That said, we have much more to offer and given another 10 years, our team is confident that we can make Pokerist the number one poker app worldwide.”