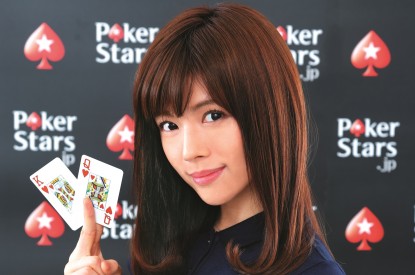 PokerStars.net has announced the sponsorship of Japanese model and actress Yuiko Matsukawa as a new celebrity brand ambassador.

Matsukawa will join a roster of PokerStars sponsored celebrities including Spanish tennis superstar Rafael Nadal, Brazilian soccer legend Ronaldo, and number one poker professional Daniel Negreanu. As brand ambassador, Matsukawa will participate in poker tournaments and marketing activities to promote poker as a game of skill. She competed in the recently completed Macau Poker Cup at PokerStars LIVE Macau, a stop on the Asia Pacific Poker Tour (APPT).

Matsukawa is a rising star in Japan. The 24-year-old launched her career at university, quickly appearing in several major fashion magazines. She has recently received significant public attention in Japan by starring as the heroine of recent release Terrace House Closing Door, a movie based on a reality TV show series about six men and women living in a shared house.

The APPT is continuing to help support the growth of poker in China with its new 2015 Nanjing Millions event, sponsored by PokerStars.net. The APPT China poker tournament, which has been sanctioned by the Jiangsu Provincial Chess Sports Association, will run April 14 to 19, 2015 at the Nanjing Olympic Sports Centre and will include a CN¥1 million guaranteed main event. The Olympic venue, which is in Nanjing, Jiangsu Province, People’s Republic of China, will give the growing number of Chinese poker players a fantastic opportunity to test their skills in the 62,000-seat stadium. The event is being held by APPT partner, the Beijing Star Poker Club.

“The growth of poker in China has been tremendous and we are committed to support this sport throughout the region,” said APPT President Danny McDonagh. “Nanjing is a key location that allows players from all over the country to participate. The previous two Beijing events last year were very successful and we are proud to be a part of this government-supported event.”

In other news, Amaya announced that more than 50,000 players competed in the 9th Anniversary of PokerStars’ Sunday Million tournament on March 15, the largest player pool in the world’s most popular weekly online poker tournament since December 2011. The prize pool paid out to players was more than US$10m, greater than the $9m tournament guarantee. Players from eight different countries competed at the final 9-handed table.