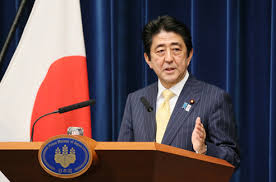 Japan’s Prime Minister Shinzo Abe’s government is setting up a task force to advise on the future development of casinos should legislators approve the introduction of integrated casino resorts.

The move is a clear sign that a positive outcome is likely for the casino concept indeed the government is keen for Integrated Resorts to be operational by the 2020 Olympic Summer Games in Tokyo.

Toru Mihara, a professor at Osaka University of Commerce who is consulting with legislators, said: “Given the likelihood that the government will not submit other important legislation which would be given discussion priority, it’s highly likely that the casino bill will be passed by November.”
Mr. Mihara added it would be ‘entirely out of the question’ that the casinos would be limited to foreigners.

“I would estimate that about 80 percent of all visitors will be Japanese. The remainder will be foreigners,” he said.

A1.7 per cent second quarter decline in Japan’s GDP has concerned politicians with the task force seen as a way of keeping casino companies interested following the casino bills failure to emerge from June’s Diet session. It is though up for debate in the Diet’s special session expected to begin within the next two months.

The affect casinos will have on Japan’s pachinko sector, which generated revenue of $36bn in 2013, is also up for debate.

“Las Vegas has dozens of resort casinos with over 150,000 hotel rooms and over 70,000 slot machines, yet there are 100s of taverns, slot parlors and other locations that offer a few machines each.”
Analysts at Morgan Stanley believe that 20 per cent of Tokyo’s pachinko players will prefer to play casinos, yielding slot revenue of $1.2bn.

They believe Japan’s casino GGR could be less than expected, pitching it at $22bn, half the amount that other analysts have suggested. Whilst Singapore’s casinos were all about attracting tourism, Japan’s are more likely to be focussed on generating revenues to counter the fall in second quarter GDP. Morgan Stanley predicts revenue of $5bn for an Integrated Resort in Tokyo and $2.5bn in Osaka.

Muhammad Cohen a journalist at Forbes, said: “If the task force can’t revive legislative momentum toward legalization and the domestic economy heads further south, a wave of sanity could temper expectations and enthusiasm among casino companies, just what Prime Minister Abe and his foundering economy doesn’t need.”