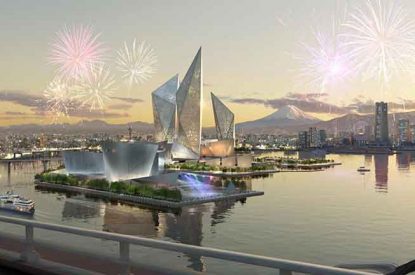 Due to the focus on preventing the spread of COVID-19, the Japanese city of Yokohama city is delaying its Implementation Policy for two months to August 2020.

The policy will outline the size of the IR, its concept and its security measures.

Yokohama Mayor Fumiko Hayashi said: “As a city, I would like to make efforts toward the schedule, especially since the national government has not changed its own policy.”

Applications for IR certification with the national government are stilling running from January to July 2021.

Several big name international operators have laid out Yokohama. Japan-based Sega Sammy Holdings has released an artistic impression of the integrated resort it wants to build on the Yokohama waterfront along with two new local partners.

The group has already announced a Strategic Business Alliance with UK architecture Foster + Partners. Adding to this deal Sega Sammy has now announced two more partnerships, one with with marketing company Katana to promote its ‘Japanese-style IR business plan aiming for increased business success rates’ and one with Japanese restaurateur Kyoto Kitcho.

Las Vegas Sands Managing Director of Global Development, George Tanasijevich has said the integrated resort destined for Yokohama should become an iconic part of the city’s skyline like Marina Bay Sands has in Singapore.

Genting Singapore has said it is ‘engaged in the ongoing request for concept (RFC) by Yokohama city.’